Solar power in your home and how it works 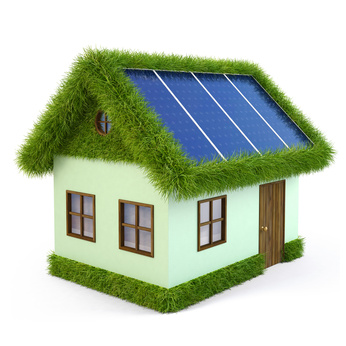 The solar panels you see on an increasing number of Australian homes are made up of a connected assembly of photovoltaic cells (also called solar cells).

Most photovoltaic cells are currently made of silicon wafers that have been 'doped' with impurities so that one side is negatively charged and the other is positively charged.

When sunlight hits the surface of the photovoltaic cell electrons are 'knocked loose' from the atoms in the wafer.

Different photovoltaic cell technologies convert different amounts of energy from the sun into electrical energy. Efficiencies range from 10 to 20% for commercially available photovoltaic cells, but in research labs efficiencies as high as 44% have been achieved. 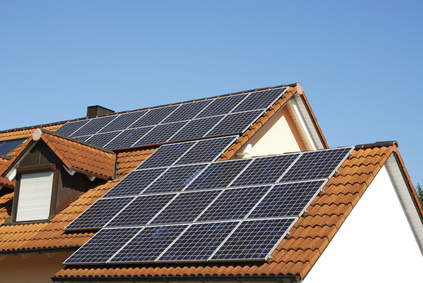 There are several different types of solar panels currently being manufactured. The majority of them consist of arrays of ‘modules’, with each module containing a set of photovoltaic cells. The larger the array of modules, the larger the solar panel, and the greater the amount of electrical power it can produce.

Solar panels are usually covered with a glass panel designed to reduce the loss of energy caused by the refection of sunlight and to protect the photovoltaic cells from the elements.

The typical solar power installation for a home in Australia would consist of several standard sized solar panels installed on the roof.

With so many different types of solar panels on the market, it can often be confusing as to what options are available, how much they cost, and the advantages and disadvantages of each. The following information was obtained from the Clean Energy Council of Australia website:

Monocrystalline panels are a proven technology that has been in use for over 50 years.

In practical terms they have the highest efficiency: 12 to 15% (i.e. in real world applications). This means that fewer panels are required to produce a given amount of electrical power.

This type of solar panel is most often used where space is limited, or where there are higher costs associated with installing large panels.

These panels have a very slow degradation, generally losing 0.25 – 0.5% of their efficiency per year.

These panels are similar to mono-crystalline panels but the silicon used is ‘multi-crystalline’ which is easier to make.

They are comparable to mono-crystalline in performance and durability, but their efficiency is slightly lower, typically 11 to 13%.

Due to the lower efficiency more panels are required to produce a given amount of electrical power.

Thin film solar panels are less expensive to manufacture, but less than half as efficient as solar panels based on older photovoltaic cell technology (5 to 6%).

Therefore this type of panel is typically double the size of the other solar panel types.

How a solar power system in the home works

Solar panels capture and convert sunlight into direct current (DC) electricity. This is then fed to an inverter, which converts DC to alternating current (AC). AC is what powers your lights, air conditioning, and other electrical appliances.

Solar power in the home. Image supplied by Modern Solar

There are currently two types of government incentives which make solar panels more attractive and affordable.

'Solar Credits' was introduced as a replacement for the Solar Homes and Communities Plan (SHCP). On 9 June 2009, Federal Environmental Minister Peter Garrett announced the sudden axing of the SHCP rebate with the program closed to further applications on midnight of the same day.

Solar Credits came into effect soon after as a mechanism of the Small-Scale Renewable Energy Scheme. Under the program, eligible premises receive additional small-scale technology certificates or STCs (formerly known as RECs), which can be traded for cash value.

In December 2010, the Federal Government announced its plans to phase out the rebate a year earlier than planned.

From 1 July 2011, the Solar Credits multiplier was reduced from five to three. On 1 July 2012, the multiplier reduced to two, where it will remain until the program's end on 30 June 2013.

A Solar feed-in tariff is a premium rate paid for electricity fed back into the main grid from an eligible rooftop solar power system.

Solar feed-in tariffs (FiTs) in Australia have so far operated only on a State Government Level; there is no nationalised FiT program to date. In most states, solar FiTs have been either scaled-back or closed completely.

The hugely popular NSW Solar Bonus Scheme ended in 2011, as did FiT schemes in the ACT and WA . The solar FiT program in Victoria was substantially downsized in the same year and South Australia’s FiT was amended to offer a reduced rate to new customers at the beginning of 2012.

Most recently, the FiT offered under Queensland’s Solar Bonus Scheme was slashed by 80 per cent for all new installations from July 10, 2012.

There are currently no FiT schemes in Tasmania or the Northern Territory.

In spite of this, the uptake of solar panels in recent times has still been very strong. There are still plenty of benefits gained when using solar power to subsidise the use of coal power. For example any energy produced by your solar system that gets used within your home is discounted from your electricity bill. There are also energy companies who will provide you with an artificial Feed in Tariff as an incentive to use them as your energy provider. In addition there are a wide range of environmental benefits gained through the use of solar power, as discussed above. And, thanks to China, the prices of solar panels are dropping.

What will you save by using solar energy

The amount of money you save depends on where you live as this changes both the average output per day and the feed in tariff (FiT) you receive.

Your savings are also dependent on how much you send back to the grid. For example take two people from NSW who pay around 26c per kilowatt and receive a 7.7c feed in tariff. If person 'A' sends 80% back to the grid (because they are at work all day and do not use much of the energy they produce), they will benefit less than person 'B' (who might be a stay at home mum) who sends back 50%. This is because the price paid for the feed in tariff is less than what you get if you simply use the power you produce.

Shopping for a solar power system?

Check out package deals carefully. Are all the components in the package good quality? Components include the solar panels, the inverter, the wire and the frame.