Growing grevilleas in your garden 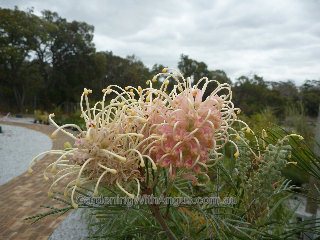 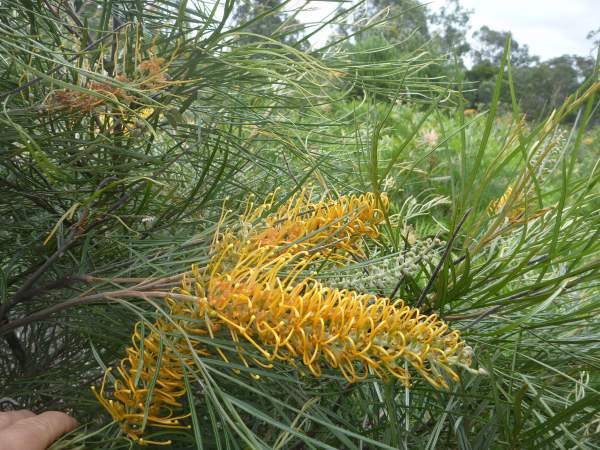 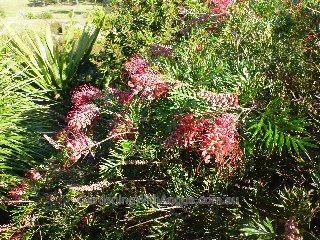 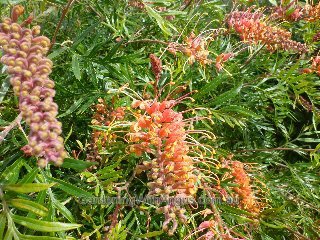 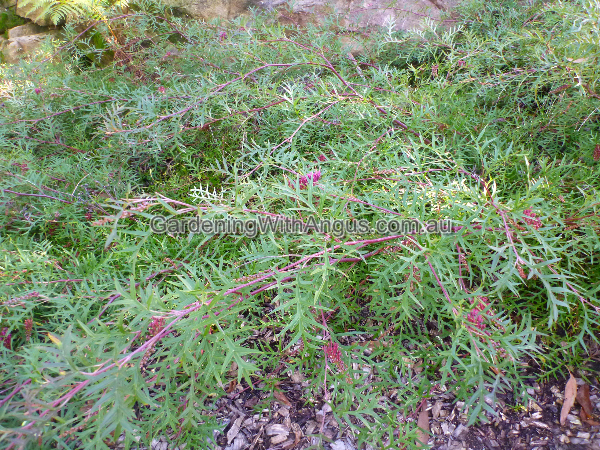 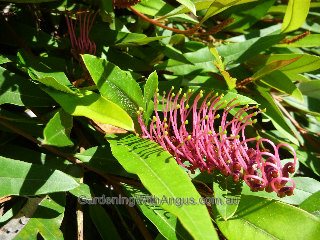 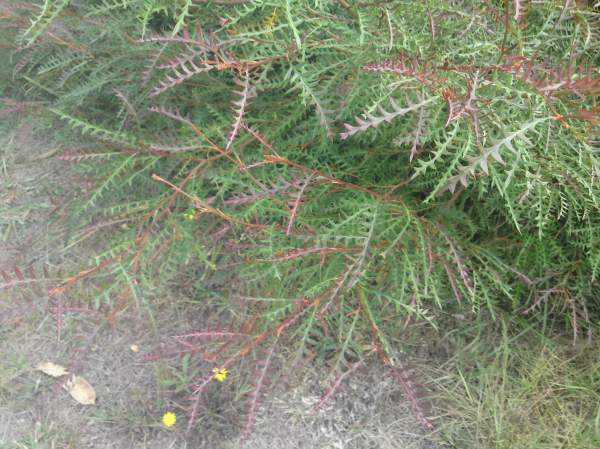 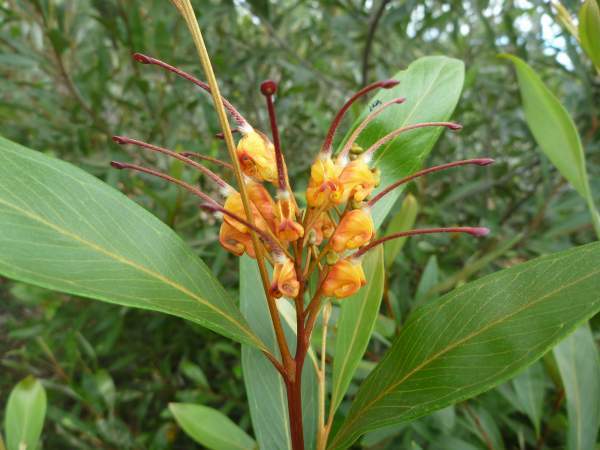 Grevillea is undoubtedly one of the jewels in the crown when it comes to the Australian flora. There is something like 500 species of Grevillea spread over a very wide range of wild environments such as desert, semi-arid, sub-alpine and rainforest as well as the more familiar dry eucalypt forest habitat. Grevillea is also arguably the genus of Australian plants that has seen the greatest advances in genetic improvement with hundreds of new cultivars in existence through selection or deliberate breeding. There are now improved cultivars across every category of Grevillea that often combine the best characteristics of two or more wild species in a hybrid cultivar. Alternatively, a number of cultivars have arisen as improved or unusual forms of a wild species such as a different coloured flower or a more compact habit.

Grevilleas can be divided into several different groups. These are described below.

Also known as ‘tropicals’ or 'Queensland' Grevilleas, cultivars such as ‘Honey Gem’ and ‘Moonlight’ have become a prominent part of many Australian gardens and have proved to be long flowering, bird attracting plants that thrive over a wide range of climate and soil types. Some of these grevilleas can grow into small trees when given ideal conditions so it is important for gardeners to realize this fact when selecting the right variety for their garden. All these varieties originate from a group of species from Queensland such as G. banksii. The best of the large flowered Grevilleas for my money is ‘Moonlight’ with its creamy white flowers being consistently produced all year round in a range of climates (although it is not good in frosty areas) and soil types. It will form a small tree if left unpruned but regular trimming will help to keep a more compact shape. As many large flowered Grevilleas have a reasonable vase life, an ideal way to prune is by cutting stems for indoor decoration. A host of new large flowered Grevilleas have appeared over the last ten years and can be found in our plant database.

A second type of large flowered Grevillea that is even more popular is what I would call the 'Robyn Gordon'. Back in the 1970’s Mr David Gordon started this group when he selected a hybrid seedling that had come up in his garden and named it after his daughter Robyn. Perhaps the most widely planted grevillea of all, ‘Robyn Gordon’ turned out to be a hybrid between the Queensland species G. banksii and a spectacular Western Australian species G bipinnatifida. Since then a number of people have repeated the hybrid combination of these two species to create a range of grevilleas that form dense shrubs to around a couple of metres that bear spectacular flowerheads all year round. These new crosses have extended the colour range from the bright red ‘Robyn Gordon’ to ‘Peaches and Cream’ (yellow and orange), ‘Superb’ (orange).

Another group of grevilleas worthy of attention is the so called spider flowered types. These have smaller clusters of flowers but what they lack in flower size they make up for in subtle beauty. The Deua grevillea (G. rhyolitica) is an outstanding example which produces its bright red flowers all year round and has given rise to some outstanding new hybrid cultivars such as ‘Lady O’. This group generally grows much smaller and can be kept trimmed into very neat small to medium shrubs.

The last great group of grevilleas is the 'toothbrush’ type which is characterised by one-sided flower heads that literally look like toothbrushes. Whilst the flower heads of these Grevilleas are perhaps not as spectacular as the large flowered Grevilleas, they make up for it by having a wide range of fascinating foliages that provide a wonderful range of ground covers and shrubs of all sizes that make excellent screen plants

Some of my favourite toothbrush Grevilleas include ‘Bronze Rambler’, an outstanding ground covering grevillea that is extremely adaptable to differing climates and soil types and has interestingly textured foliage with beautiful coppery coloured new growth. Another tried and trusted ground cover is 'Poorinda Royal Mantle', probably the most widely planted low growing Grevillea of all with its red flowers and divided foliage. It can cover many square metres and is ideal spreading over sloping sites as well. It can also be used as a weeping standard when grafted onto a rootstock such as Silky Oak (Grevillea robusta) 'Poorinda Peter' is a large spreading shrub with bronze-coloured new growth which harmonises well with the pinkish flowers.

Growing and maintenance tips for grevilleas

Grevilleas are sensitive to even moderate amounts of phosphorus in the soil and if not managed carefully this can be fatal. Please read the section on fertilising phosphorus sensitive plants as many Grevilleas are killed around Australia each year. Particular care should be taken with organic fertilizers such as blood and bone and chicken manure based products as these can have phosphorus levels that are too high for grevilleas. If in doubt use a product that is specifically for native plants as these are guaranteed to have appropriate phosphorus levels.

Grevilleas respond very well to pruning and most will tend to become open and leggy if left to their own devices. Tip pruning plants at planting time and during the first few years of their life will develop a sturdy, bushy plant that is better able to resist blowing over in severe storms. Established Grevilleas will also benefit from a light pruning to just behind the flower heads after flowering to help keep them compact. One of the conundrums of growing Grevilleas is when to prune the ever blooming types such as ‘Robyn Gordon’. Each branch terminates in a series of flower heads that will provide continuous blooming for months on end. However, eventually the end of the branch accumulates a lot of ‘sticks’ where the flowers have dropped off. Simply cut these back when they become unsightly and you will stimulate new flowering branches. Alternatively, you can give them a big ‘renovation’ prune once every few years (see below). Grevilleas that have been let go can be reshaped, with the ideal time for a drastic prune being in spring when the plant is ready to bounce away with active growth.

Grevilleas are generally fairly trouble free as far as pests and diseases go. Probably the major issue for most Grevilleas is root rot caused by a variety of soil-borne fungi such as Phytophthora. A well drained soil is the key to avoiding problems down the track. Sooty mould on the leaves and stems can also affect plants, particularly as they get old and leggy. In my experience, the best solution to this is to cut them back hard in spring and encourage vigorous new growth.

Using grevilleas in the garden

SAFETY NOTE: Some people are susceptible to skin allergies that can be triggered off by certain types of grevilleas such as ‘Robyn Gordon’. If you are allergic you may be best to avoid growing grevilleas that trigger your allergy.