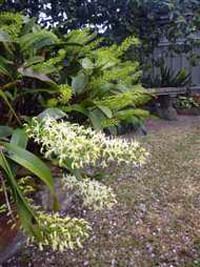 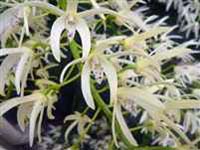 Orchids are one of the wonders of the plant world with a staggering diversity of plant and flower types that provide endless fascination and sometimes obsession for gardeners. World-wide there are approximately 30,000 species in 600 odd genera that comprise roughly 10% of all flowering plants with Australia being home to a more than 1200 species in about 100 genera. Native orchids range from the spectacular epiphytic (growing on trees) and lithophytic (growing on rocks) species of the tropical jungles and warmer areas of Australia, to the intricately subtle terrestrial (growing in the ground) species found throughout the dry eucalypts forests throughout the continent.

Generally speaking Australian orchids have smaller, more subtle flowers than their exotic counterparts. Nonetheless the subtleties of form and colour over the range of species has excited many gardeners to collect and breed native orchids with genera such as Dendrobium and Sarcochilus having numerous named hybrids that combine the best features of the wild species.

Which Australian native orchids can I grow in the garden?

Orchid culture can seem somewhat daunting to beginners, however, there are species that are likely to succeed much better than others. It is very important to choose orchids that will suit the conditions you are able to provide as some will grow quite happily under normal garden conditions such as a protected spot amongst trees while orchids of tropical origin will not thrive in cooler areas unless a heated greenhouse can be provided.

The best known Australian orchids in cultivation are undoubtedly the dendrobiums. The spectacular purple flower sprays of the Cooktown orchid (D. bigibbum) provides Queensland with its floral emblem, however, being from the Cape York area limits its potential for outdoor cultivation in southern areas of the continent. The pink rock orchid (D. kingianum) and the rock lily (D. speciosum) are both widely grown lithophytes that are easily cultivated under outdoor conditions in all but the coldest climates. In addition there are numerous hybrids that broaden the colour palette for orchid enthusiasts. 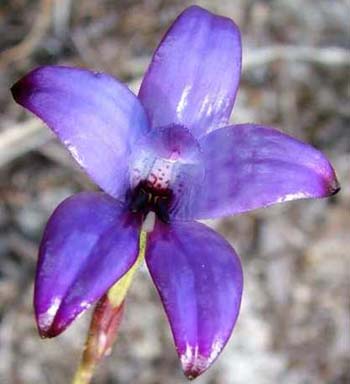 The fairy orchids (Sarcochilus species and hybrids) are aptly named for their delicate sprays of small but usually plentiful flowers with some species being delightfully perfumed as an added bonus. Some species are epiphytic and others lithophytic from a variety of climates so it is important to study the individual requirements of the particular species or hybrids you may wish to cultivate. Some of the hybrid fairy orchids are beautifully patterned in pinks and purples (eg ‘Bobby-Dazzler’ and ‘Velvet’) and oranges (eg ‘Armstrong’) and are well worth the extra effort they require to thrive.

Australia has a rich flora of terrestrial orchids which are generally rather petite but incredibly beautiful. They are also quite particular in their growing requirements and it is essential to study their individual requirements to guarantee success. Many of the native terrestrial orchids rely on relationships with beneficial fungi that inhabit their root systems and unfortunately these fungi are difficult to establish and maintain under garden conditions. An additional complication is that many terrestrial species also have dormancy periods, often in summer after they flower and during this period they can be prone to rotting out.

There are some spectacularly large-flowered species of native orchids such as the swamp orchid (Phaius tankervilleae) with showy white 12cm flowers with the interior being a mixture of crimson and cinnamon brown.

The rock orchids of eastern Australia (Dendrobium species) provide a magical touch to large tree trunks and rock formations. Species such as D. speciosum and D. kingianum cascade over in long sprays of delicate yellow and pink flowers respectively. A walk through the sandstone cliffs of Bouddi National Park on the NSW Central Coast in early spring is a beautiful way to learn about these delicately flowered yet ultra-tough plants. The rusty smooth barked trunks of the Sydney red gum (Angophora costata) are a great indicator tree as they grow in and around the rock ledges that are the preferred habitat of the aptly named rock orchids.

The rock orchids are perhaps the easiest native species to grow in the backyard as there is a choice of types depending on your climate. The NSW rock lily (D. speciosum) and the pink rock lily (D. kingianum) can be cultivated in most Australian gardens although they will need frost protection in cooler areas. A rockery is an obvious choice to provide the support medium for the plants; however, they can also be mounted on hardwood or cork slabs by tying the plants on until the roots grow enough to attach the plant naturally. Alternatively, a very coarse specialised potting mix designed for orchids will also give good results. The easiest way to fertilise is to incorporate a slow (controlled) release fertiliser into the mix at the manufacturer’s recommended rate. A position with filtered sunlight is ideal especially during summer when plants will usually need daily watering, while during winter once a week will usually be sufficient. Peak flowering time is in early spring and plants can be split up into smaller clumps straight after flowering has finished.

An experience all gardeners should treat themselves to is a trip to Western Australia in the spring time to see one of the world’s most amazing arrays of wildflowers. Perhaps the highlight of such a trip is the ubiquitous display of ground (terrestrial) orchids that can be found every time one stops by the roadside and ventures into the bush. The diversity of delicate and intricate forms is seemingly endless and the fanciful resemblance to various creatures such as flying ducks, mosquitos, hares, bunnies, donkeys, fairies and spiders.

A magical moment for me with terrestrial orchids was to find the vivid purple enamel orchid (Elythranthera brunonis) in its full glossy glory growing in a field of red and green kangaroo paws which was studded with flowering grass trees after a recent bushfire. Terrestrial orchids can be found in greatest profusion in Western Australia but are also common throughout the eucalypt woodlands of the rest of the continent. They are relatively difficult to grow due to their reliance on symbiotic fungi that live in the roots. There are orchid enthusiasts who have successfully cultivated these rare and delicate beauties.

If you are interested in growing any of the native orchids mentioned here then check out the website of the Australian Native Orchid Society (www.anos.org.au). Another fantastic website to learn about terrestrial orchids is Orchids of North-Eastern New South Wales.