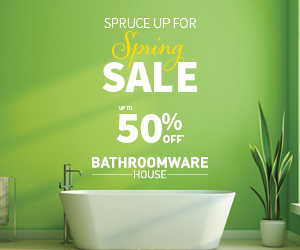 A toilet experience from another world 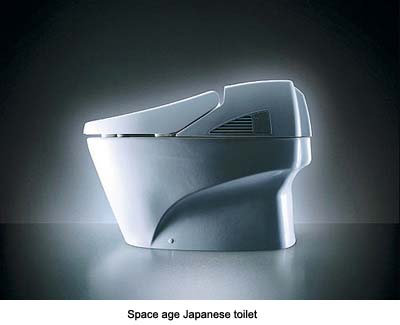 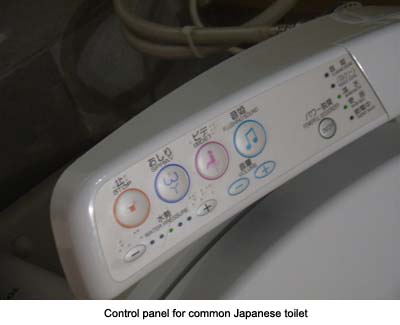 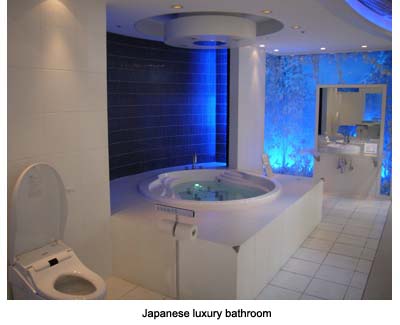 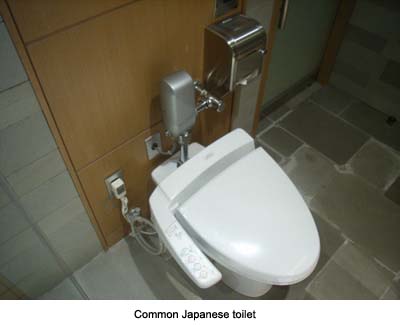 Enter a modern Japanese home and one is struck by both the sophistication of electronic entertainment and white goods. The pursuit of design and high technology seems imbedded in the Japanese psyche. Also imbedded is their art of cleanliness.

The modern Japanese bathroom can be a hi-tech shrine to ablution- a place where every private bathroom activity is imbued with soothing lighting and sensual functionality. Step into a thoughtfully lit modern shower and water jets spray you from all directions. Some bathrooms are fully computer chip controlled; the shower learns your preferences and responds accordingly with the correct water pressure, direction and temperature.

Perhaps the most unlikely recipient of Japanese intelligence is the toilet. For us the toilet is generally a place to enter and exit as fast as possible. For us the toilet bowel is soulless contrivance to deal with our human waste. Not so for the Japanese. For them a trip to the toilet is an event that requires, like any daily occurrence, the maximum possible consideration for comfort and functionality.

However for us poor unsophisticated squatters, the intelligent Japanese toilet is a daunting high tech device with a multifarious control-panel arm (and sometimes full arm and headrests) that, like HAL in Stanley Kubrick's film 2001, can have an unstoppable agenda of its own.

With the common Japanese toilet you can heat the seat to a relaxing warm temperature, play washing sounds during noisy activity, then activate a cute in-toilet nozzle that deftly sprays a fine jet of fine water jet onto exactly the precise spot. You can then activate a dryer that, with a flamboyant swirl of warm air, dries all your bits.

TOTO, a leading Tokyo toilet designer, has now produced the world's smartest toilet. After collecting data from thousands of people who have sat on toilets with electrodes strapped to their skull as their brain waves are recorded during toilet activity, TOTO have designed the futuristic NEOREST. (Look out for it in the next Matrix film!)

NEOREST takes two days to learn its master's precise habits, and then it responds automatically, like a well trained servant, (unless of course, its master seizes control due to some unforeseen activity.) 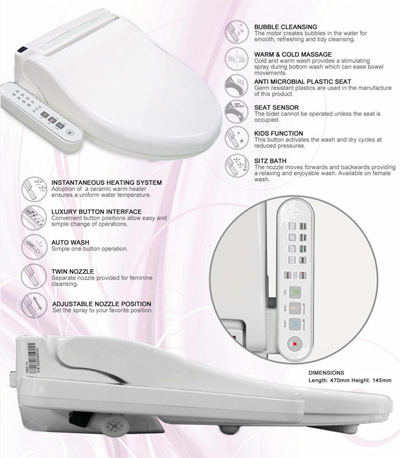 Family Friendly Bidet from the The Bidet Shop

NEOREST's lid obediently opens as you approach it. It has learnt how much to quickly warm the toilet seat. It plays soothing music to stimulate movement and knows whether its master requires music or sounds to cover up objectionable noises from activity. It even monitors blood pressure during the climax. It senses when to activate the warm water jets and knows what pressure to spray clean its master's bits and how much warm the air is needed to thoroughly dry them.

When its master rises, the nozzle retracts, the lid gently comes down as the nasties are quietly swept way into oblivion without even the use of a water tank. As it sucks the odour from the atmosphere it wishes you a pleasant day and looks forwards to your company again.

One wonders where NEOREST will go from here. In the future the toilet bowl is likely to massage your muscles, analyse your waste, and while in a relaxed position, monitor other body functions. No doubt flat screens will soon appear behind toilet doors. The possibilities are mind boggling.