Australian annual and perennial plants can be used to create excitement in your garden as they are quick growing, usually very floriferous and because they are relatively temporary they can be replaced on a regular basis to add something new each year. Annuals and perennials are defined by the fact that they do not develop woody stems (they are often referred to as soft-wooded) with annuals completing their entire life cycle within a year while the perennials will go on for two or more years. The lack of woodiness limits the size they can reach, meaning that this group is always relatively low growing, usually less than a metre or so in height. This also means that there are many species that are ideal for pot culture, excellently suited to smaller gardens.

The Australian flora is relatively rich in such plants and the potential was quickly realised by European plant collectors in the early 19th century who sent home seed and cuttings to the eager horticulturists back home. Annuals such as the Strawflowers or everlasting daisies Xerochrysum bracteatum , Rhodanthe chlorocephala subspecies rosea, Swan River Strawflower (R. manglesii) and the Swan River daisy (Brachyscome iberidifolia) were hybridised to create a range of colourful and rapid growing flowering plants. These improved types have stood the test of time and are still readily available today.

Bold strokes of colour for your garden

As mentioned earlier a handful of Australian annuals have been developed to the point where they are reliable sources of colour for a temporary display. A lovely way to use plants such as everlasting daisies and Swan River Daisies is to create informal meadows of mixed species. A swathe of such plants conjures up images of the world famous Western Australian spring wildflower displays. Of course there is nothing to prevent these plants from being used in a more formal way if that is the style of your garden. 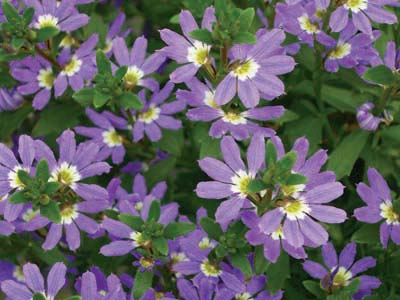 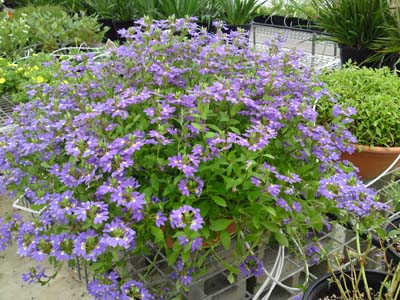 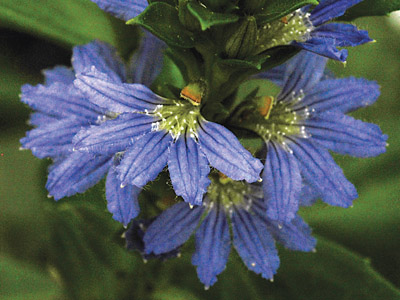 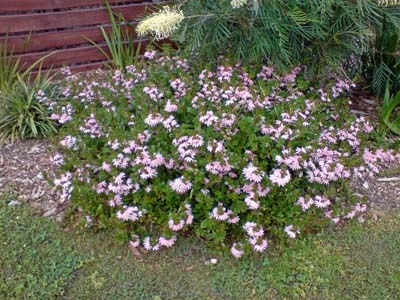 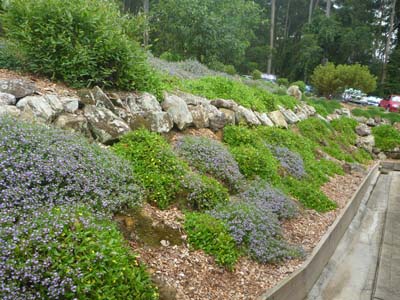 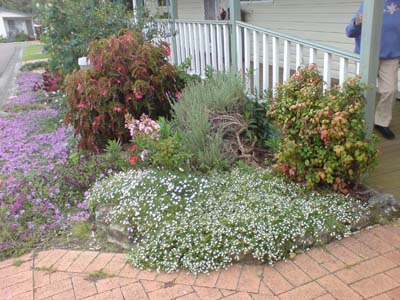 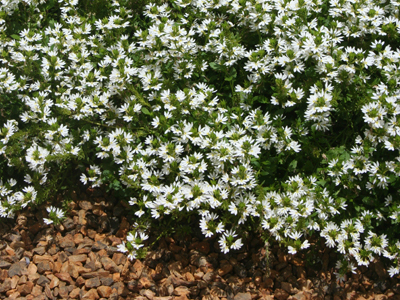 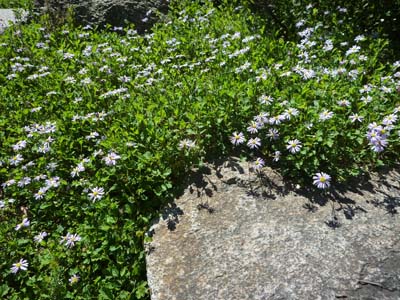 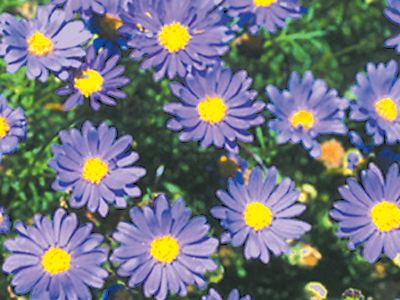 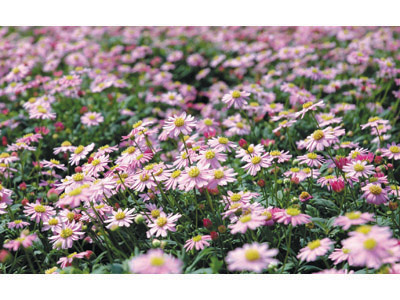 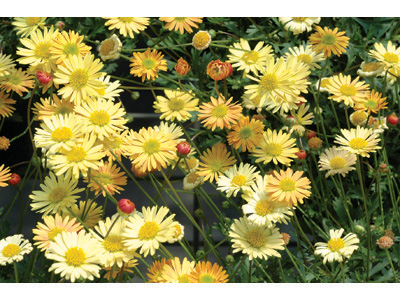 An exciting trend in recent years has been the improvement in quality and availability of a number of the more colourful and reliable Australian herbaceous perennials. Plants such as fan flowers (Scaevola), native daisies (Brachyscome), everlasting or paper daisies (Rhodanthe and Xerochrysum) have been bred and selected to give long flowering compact specimens that rival any exotic perennial.

One of the most delightful groups of Australian perennials is undoubtedly the native daisies (Brachyscome species and hybrids). They provide a wonderful array of compact bushy daisies that provide a long lasting display of flowers throughout the warmer months of the year. Species such as the grassland daisy (B. angustifolia) and Pilliga daisy (B. formosa) have the added advantage that they sucker lightly to form compact, spreading mounds topped with flush after flush of delicate little daisies. Look out in nurseries for the many brachyscome cultivars such as ‘Pink Haze’, ‘Pilliga Posy’, ‘Break’O’Day’, ‘White Surprise’, Mauve Delight’ and ‘Strawberry Mousse’ that offer even better garden performance than the wild species.

Another group of daisies that has come on in leaps and bounds is the everlasting daisies with many new releases offering cultivars in a wide range of colours and heights. The strawflower (Xerochrysum bracteatum) is grown worldwide and was known for many years as Helichrysum bracteatum or more recently as Bracteantha bracteata. Whatever name you are familiar with there is no doubting the charm of these plants with their durable flowers being able to be picked and dried for extremely long lasting arrangements. As well as annual types in a variety of colours such as the ‘Bright Bikini’ seed series, there are also now some brilliant large flowered perennial types such as ‘Coco’ and ‘pink Sunrise’ that grow into bushes a metre or so in height and flower throughout the warmer months.

Another perennial form of everlasting daisy worthy of special mention is the Sunray (Rhodanthe anthemoides) that will provide several years of subtle spring displays. All forms of perennial everlasting daisies will benefit enormously froma light prune after they have flowered. Another excellent way to gain full advantage from these useful plants is through pot culture. Grow them in large display pots for the warmer months of the year and you will be richly rewarded.

The fan flowers (Scaevola species) create outstanding displays of mauve and purple with new varieties such as S. aemula ‘Purple Fanfare’. An ever increasing array of new cultivars is appearing as a result of deliberate bredding programs and this group is one to watch in the immediate future.

One of the standout perennials in the Australian flora is undoubtedly the kangaroo paws (Anigozanthos) with unique furry flowers in every colour except blue. The strap-like foliage can also be used to create interest in the designer garden. Of particular interest are hybrid kangaroo paw cultivars that have instilled a reasonable degree of adaptability in a wide variety of colourful forms. Some of the best of the smaller cultivars such as ‘Bush Ranger’ and ‘ Bush Pearl’ also have the advantage of year round flowering (given a frost free situation).

Clumping perennial plants with sword-like foliage have grown enormously in popularity due to the interesting vertical lines they create and their low maintenance requirement. A single trim back after flowering of old flower stems and any browning foliage keeps them looking fabulous. The Gymea lily and its cousin the spear lily (Doryanthes excelsa and D. palmeri respectively) are huge examples with leaves up to a couple of metres long and flower stems up to 10 metres, while smaller types such as the flax lilies (Dianella species) and mat-rushes (Lomandra species) provide a variety of foliage sizes, widths and colours to suit any situation.

For gardeners in warmer, more humid climates there is a host of interesting plants from the moist forests of eastern Australia. All of the species below also flower well in shady conditions, a situation that often . Ground covers such as Austral bugle (Ajuga australis), monkey flower (Mazus pumilio), Pratia pedunculata and native violet (Viola hederacea) are very useful as lawn substitutes, garden understorey or as potted specimens. Taller perennials such native ginger (Alpinia coerulea), flax lilies (Dianella species) and stream lily (Helmholtzia glabberima) are also increasingly finding a place in modern garden designs.