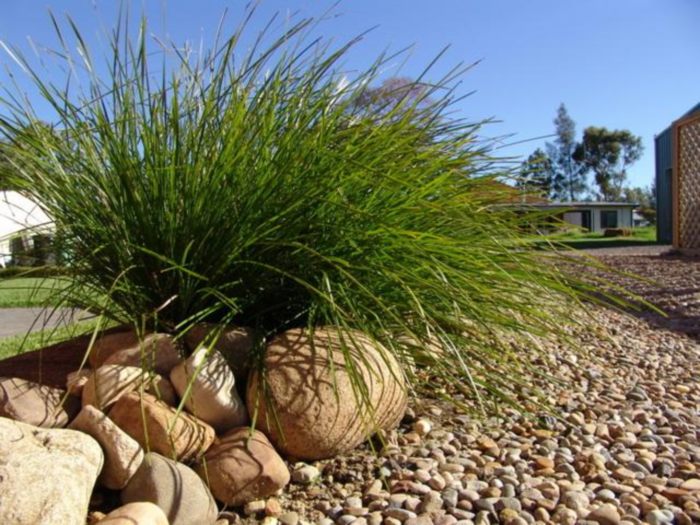 An exciting thing is happening in the world of Australian plants. Wild species that have tantalised gardeners in the past are now being improved to create a diverse palette of new varieties that offer all kinds of advantages. In particular, the necessity for water-wise, low maintenance gardens has inspired interest in plants that can be used as ground covers that will not only suppress weeds and erosion but also look fantastic. Native grasses and their grass-like relatives are just what the doctor ordered as they bring a wonderful architectural dimension to the garden with their tufting growth habit, attractive strap-like leaves in various hues. Add to this the possibilities of subtle drifts of flowers and colourful bird attracting fruits with a very minimal amount of maintenance and you begin to understand why the fabulous array of new varieties are some of the hottest new plants in the western gardening world.

Several groups of plants are leading the charge including tussock-grasses (Poa species), flax lilies (Dianella species) and the mat-rushes (Lomandra species). The three groups are united by their tufting natures, yet each offers its own versatility and diversity that provides a wonderful complement to a huge range of native or exotic species. The clean vertical lines these plants add to the landscape make them perfect for the new minimalist 'less is more' gardens that are at the cutting edge of garden design for courtyards and other small spaces around buildings.

Perhaps the best feature of grasses and their relatives is the year round interest they add to the garden. None of the plants featured in this article can boast a show-stopping floral display yet they have become indispensable to many gardeners as 'backbone' plants that they can build their garden around.

Commonly known as mat rushes, this genus is closely related to the grass trees (Xanthorrhoea species) with which they share the eucalypt forests around the continent where they receive filtered sunlight, a good clue as to where to plant them in the garden. While lomandras are often found in dry forests they also adapt well to wetter situations along creeks, as their common name would suggest. Lomandras can be tiny grass-like plants less than 10 cm in height, such as L. confertifolia that make a terrific alternative to mondo grass, through to species a metre or more in height such as the very popular spiny-headed mat rush (L. longifolia). Most species flower in spring or summer with interestingly textured blooms that may have an unusually pleasing perfume.

Lomandra 'Tanika' has to be one of the hottest new foliage plants released in recent years. It is a fine-leafed form of the widely planted species L. longifolia which has a much more grass-like appearance than its broad-leafed parent. It forms a very dainty clump 60-70 cm in height and a width of 50 cm yet is one of the toughest and most adaptable plants available. It apparently withstands the cold winters of Canberra as well as it copes with the searing summers of Perth. It also has an interesting display of uniquely perfumed lemon yellow flowers in spring.

The small tussocky habit of this fine-leafed beauty makes it particularly useful as a border plant that could be substituted for old garden favourites such as Liriope or mondo grass. Growing to a height of just 30cm by a similar width, it features soft blue foliage. While it is said to be frost tolerant it can be somewhat slow to establish in cooler climates.

There are around 30 species in this genus, which is widely distributed through the Pacific region with about 8 of those occurring in Australia in the wetter parts of the continent. Dianellas occur in a wide variety of habitats from rainforest to dry eucalypt forest and even coastal sand dunes. Ranging in height from 20 cm through to more than a metre and a half they are very tough plants that generally grow from underground stems (rhizomes) that help the plants withstand drought and bushfire. Dianellas generally feature blue flowers in spring that can vary from sky to royal blue depending on the species, with variations such as white also being found on rare occasions. The fruits are also an ornamental feature in many species featuring dramatic purple berries that remain on the plant for several weeks. There are many new varieties of these versatile strappy-leafed Australian plants as follows:

Dianella revoluta 'Little Rev' is a dwarf blue-leafed selection of a species that is found in every state. The outstanding features of this cultivar are its compactness (it grows to a height of 30-40cm with a spread of 30 to 35cm) and the lovely soft blue colour of the foliage.

The paroo lily, D. caerulea is another very widespread species that is absent only from South Australia. It is a highly variable species that has provided several new cultivars, namely 'Little Jess', 'Breeze' and 'Cassa Blue'. 'Little Jess' is described by Todd as being like a miniature non-invasive bamboo only native in origin. It forms short cane-like growths that are much shorter than the typical forms of D. caerulea, reaching approximately 40 cm in height. It is claimed that trialling in environments as diverse as Cairns and Canberra has shown “brilliant” performance. 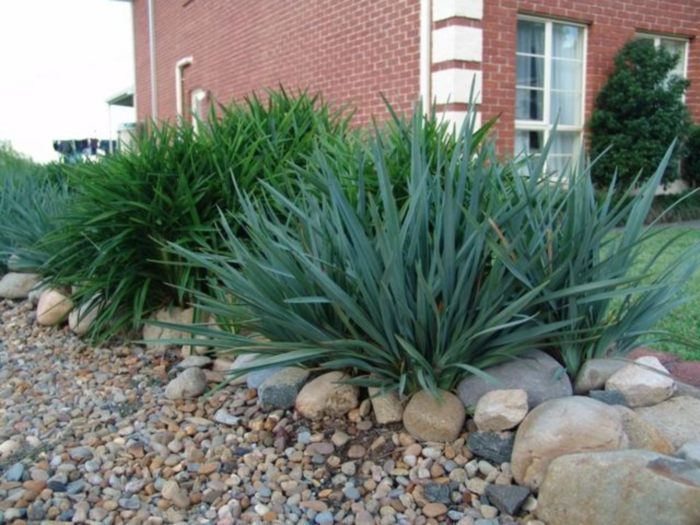 The great advantage of D. caerulea 'Breeze' over typical forms of the species is that it does not form canes that tend to turn brown over time, fall over and look rather unsightly. 'Breeze' is a medium sized dianella at around 70 cm tall with a spread of 60 to 70 cm. Todd claims that this is such a low maintenance plant that it only needs to be trimmed every 5 to 8 years which would make it one of the world's easiest plants to manage in the garden. 'Cassa Blue' boasts rather striking blue leaves that make an excellent contrast with a wide variety of companion plants. It also has a very compact growth habit with a height and spread of only 40 cm. Add to this the sky blue drifts of flowers held above the foliage and you have an exceptionally tough ground cover with a delicate appearance. 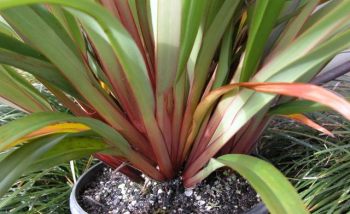 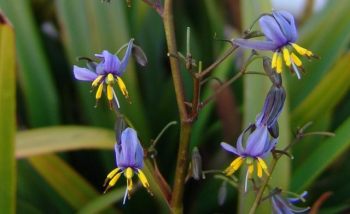 Although the species name of Dianella tasmanica indicates that this is a Tasmanian native, it also extends its range further north to Victoria and New South Wales. This species has proven reliable and popular in cultivation for several decades. Todd Layt's selected form of this species known as 'Tasred' is remarkable for its changes in foliage colour through the seasons. In winter, depending on the climate it is grown in, the leaves develop a red base and margins with yellow tones through the leaf blades. The colours become less intense as the weather warms up, however, the strappy foliage always looks good in the garden with its compact habit, reaching a height of about 40 cm and a similar width.

For those looking for a native plant with a difference then Dianella 'Silver Streak' will fit the bill with its striking variegation pattern. A clean white streak along each leaf provides a wonderful contrast to the deep green background of the foliage. This is a particularly useful plant for the uncluttered courtyard garden that relies on interesting foliages for year round interest that requires virtually no maintenance. With a height of 50cm and a width of 40cm it is ideal for mass planting.

This is a very large group of grasses with over 300 species native to the temperate regions of the northern and southern hemispheres. Most people will have heard of Kentucky bluegrass (Poa pratensis), a famous turf grass that originates in Europe but is very widely grown in the United States. Australia has about 50 species that range from 10 cm in height to more than a metre and a half, with common tussock grass (P. labillardieri) and coastal tussock grass (Poa poiformis) being particularly popular in cultivation. The Australian species are very adaptable plants that grow from Mt Kosciuszko to the coast in a wide range of habitats. They generally do best in open, sunny positions and can tolerate poor drainage and low nutrient soils. The dainty flower heads are usually displayed during the warmer months of the year. 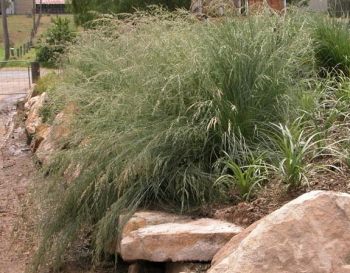 The wonderfully fine-textured arching blue foliage is the outstanding feature of 'Kingsdale'. Growing to a height of 45cm it will out compete most weeds if planted at a density of 15-20 per square metre. It has performed very well in a wide range of climates in southern Australia but is not recommended for north of the NSW border.

Somewhat larger than 'Kingsdale' at a height of 60 cm, this vigorous poa is also much more suitable for southern climates than subtropical to tropical areas. The fine blue foliage is fantastic for well-lit positions in the garden. 'Eskdale is particularly well suited to mass planting on banks or other extensive areas in the garden that require a low maintenance ground cover.