Growing Banksias in your garden 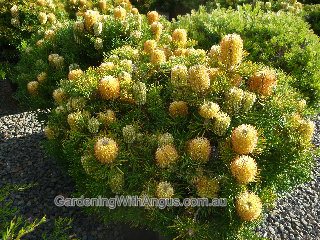 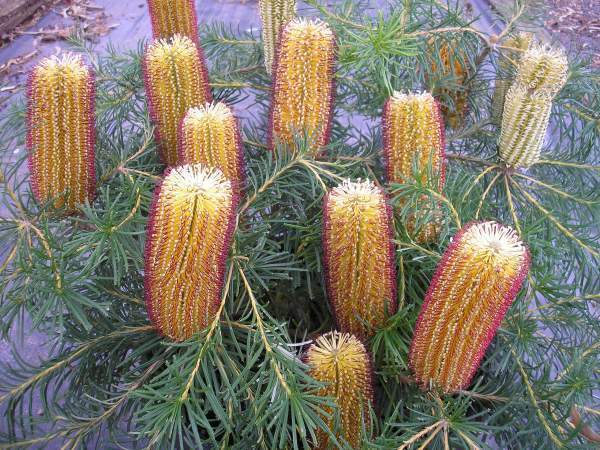 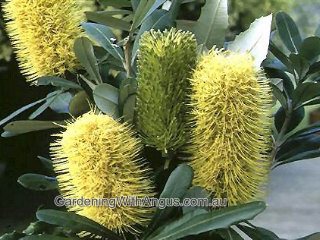 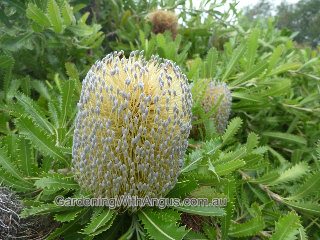 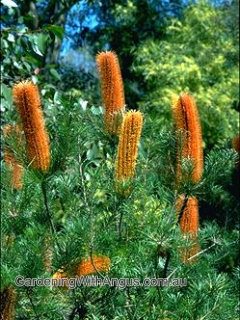 There has to be a place for at least one Banksia in your garden. The incredible range of sizes and shapes in flowers, foliage and growth habit make them a ‘must have’ to add texture and wildlife to boot. If you want a tree as a perch for birds to view your garden to satisfy themselves it is safe for an extended visit, then the coast Banksia (B. integrifolia) or Old Man Banksia (B. serrata) are good options. There is an endless variety of shrubby Banksias too numerous to mention in detail. There are even ground covering Banksias with the intriguingly named Southern Blechnum Banksia (B. blechnifolia) from Western Australia providing an option. The Southern Blechnum Banksia (B. blechnifolia)

Without doubt the dwarf selections of Banksia made over the last 20 years have been one of the greatest breakthroughs made in Australian plants for the home garden, especially given the trend towards much smaller gardens. Having said that, these low growing Banksias can readily find a place in gardens of any size and are particularly good for container gardening. In my opinion, the best dwarf selections have undoubtedly come from the Hairpin Banksia (Banksia spinulosa). The cultivars 'Stumpy Gold', 'Coastal Cushion', 'Birthday Candles', 'Cherry Candles', and 'Honey Pots' all form low growing mounds that are festooned with the candle-shaped flower heads that are such a distinctive trademark of the Australian bush.

Other Banksia species have also provided some very useful dwarf and ground covering cultivars. The coastal Banksia (B. integrifolia) has provided the ground cover 'Austraflora Roller Coaster', Old Man Banksia (B. serrata) has the prostrate 'Pygmy Possum' whilst the excellent compact shrub 'Mini Marg' is a selection of B. marginata.

Large flower heads are also a feature of many Banksia species. The cultivar ‘Giant Candles’, a probable hybrid between the heath-leaved Banksia (B. ericifolia) and the Hairpin Banksia (B. spinulosa) is one of the most spectacular Banksias for the garden. The flower spikes are over half a metre in length.

Probably the most important thing about growing Banksias is their nutrition. They are generally amongst the most phosphorus sensitive of Australian plants so be sure to use a low phosphorus fertiliser when you feed them coming into spring.

Another important feature of Banksias is the fact that their peak flowering comes mainly in winter. This means that if you are going to prune them the ideal time is straight after they finish flowering at the end of winter. Cut them any other time and you risk removing the flower buds or potential flowering wood. There are two growth habits in Banksia as well that also influence how they should be pruned. Species such as the hairpin banksia (B. spinulosa) have a lignotuber, a swollen stem at the base of the plant that produces new shoots after severe bushfires that kill all the existing above ground shoots. This type of growth habit in other banksias can be recognised by a swollen base at the crown of the plant. Non-lignotuberous types include species such as Banksia ericifolia. This type tends to die completely after a bushfire and it is best to only cut them back to stems the thickness of your thumb.

Another important point with pruning Banksias is to choose the kind of look you want them to bring to your garden. As the flower heads finish blooming, you must decide whether you want to allow them to go to seed or not. Species such as B. serrata have rather ornamental seed pods which display themselves prominently indefinitely. In my own garden I prefer to leave the seed pods on the plant to give the garden that “big bad Banksia man” feel to the garden, but this is purely a matter of personal opinion. If on the other hand, your preference is to remove them, then it is best to do it straight after flowering.

Using Banksias in the garden

There is a tremendous range of growth habits in the genus Banksia. If you are looking for trees that will not only attract birds but give them a safe haven from cats then species such as Old Man Banksia (B. serrata) and Coastal Banksia (B. integrifolia) will grow from 10 to 15 metres depending on climate and soil conditions. A number of Banksias form large shrubs that are ideal as screening plants along fence lines including Heath-leaved Banksia (B. ericifolia), its dwarf form ‘Little Eric’ and its excellent large flowered hybrid 'Giant Candles', Scarlet Banksia (B. coccinea), Bull Banksia (B. grandis). For small to medium shrubs that will bring birds into your garden at eye level there are again numerous options such as the Hairpin Banksia (B. spinulosa), Possum Banksia (B. baueri), B. canei and B. aemula. If you are looking for a ground cover there are numerous dwarf cultivars mentioned earlier in this section as well as the extraordinary species B. blechnifolia. In general the Western Australian species become more and more difficult to grow reliably on the east coast the further north you go. The eastern states Banksias are fairly reliable in most parts of Australia by contrast so it is well worth researching the origin of any Banksias you are contemplating for your garden.

Banksias also make terrific cut flowers, especially the larger shrubby Western Australian species such as B. prionotes and B. menziesii. A couple of the eastern states species such as the Hinchinbrook Island banksia (B. plagiocarpa) and swamp banksia (B. robur) are also great cut flowers while the coast banksia (B integrifoliai) is a wonderful long-lived cut foliage for arrangements which features a silvery-white undersurface to the leaf.