Australia is home to about 40 species of Hibiscus, most of which are endemic. They have identical growing requirements to the exotic species and cultivars that are so popular in cultivation. An ever increasing interest in native hibiscus has led to the horticultural development of a number of new cultivars which rival the exotic types in beauty and flower size. The native rosella (H. heterophyllus) and the hollyhock tree (H. splendens) are two of the most popular species in cultivation as well as being parents for hybrid native hibiscus cultivars such as ‘Sunset Glow’ and ‘Pink Ice’. The genus Alyogyne is closely related to the hibiscus and the species A. huegelii is well established as an outstanding garden plant. The cultivar ‘West Coast Gem’ is a purple flowered form of this species that performs well over a wide climatic range. 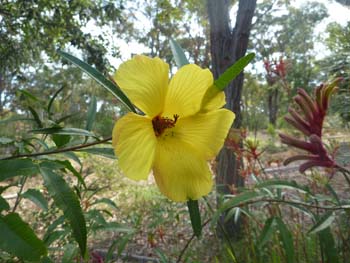