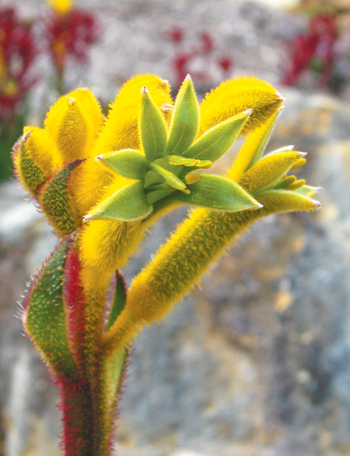 A renewed interest in the new millennium in Australian plants has inevitably led to great advances in the genetic improvement of our flora. Sometimes improvements are deliberate through plant breeding techniques such as hybridization while in other cases gardeners and nursery people have simply noticed outstanding genetic variations in wild or cultivated plants that have subsequently been propagated by vegetative means. Improvements such as larger flowers, improved growth habits, colour variations in foliage or longer flowering periods are typical of the characteristics that are now available. Where a genetically distinct new plant is named it is called a cultivar, a hybrid word in itself derived from combining ‘cultivated variety’. Cultivars may be selected forms from within an existing species such as Telopea speciosissma ‘Wirrimbirra White’ or they can be hybrids between species (interspecific hybrids) eg Anigozanthos ‘Yellow Gem’ (A. pulcherrimus x A. flavidus). Such hybrids sometimes occur spontaneously in wild populations or in garden situations where species are brought together and seedlings pop up around them. In both cases observant plant people spot the hybrids and propagate them. 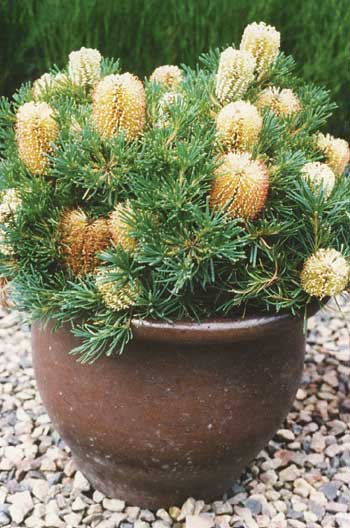 This spectacular banksias features extremely large flower heads and forms a tall shrub 4–5 metres in height if left untouched. Apparently this cultivar arose as a chance hybrid between the heath leaved banksias (B. ericifolia) and the hairpin banksias (B. spinulosa) in a Brisbane garden. This plant is quite adaptable to a range of soil types and can cope with less than perfect drainage. Low phosphorus native plant fertilizers should be used in autumn and spring for maximum flower production. The best strategy for a compact growth habit is to tip-prune it right from the beginning to obtain a great bird-attracting plant. It has proven adaptable to all but the coldest and most tropical Australian climates.

This vibrant purple daisy has proven its worth as a ‘cottage garden’ native plant in most parts of Australia including the most of Queensland. Its non-stop flowering habit is another reason it makes my top ten. It grows as a ground covering plant that can spread to half a metre or more in width. Break’o’day arose as a chance seedling in the garden of Peg McAllister of Lilydale, Victoria. It makes a fantastic rockery or pot plant and requires plenty of sun and reasonably good drainage to reach its full potential. A light trim after the main flowering flush in spring will help to create a compact flowering plant through summer and autumn. 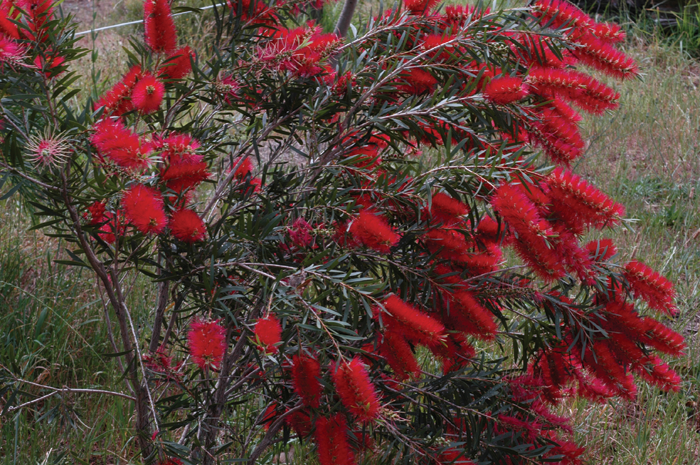 The vibrant, large red brushes make this a top choice in callistemon. It forms a large, upright shrub 3–4 metres tall and 2–3 metres wide, with attractive, dense foliage and bright red flower spikes that are borne right through spring and summer. This cultivar was selected at King’s Park in Perth, where it apparently arose as a chance hybrid. It is a very adaptable plant that is at home in a wide range of conditions and climates across most of Australia. For best results it should be pruned back to just behind the flowers after they have finished their main spring flush. It is also a perfect choice for a screen plant in difficult soil conditions such as heavy clays.

The very compact habit, bluish foliage and contrasting dark red flowers are the features of ‘Little John’. It is a very dwarf shrub 0.5 metres tall by 0.5 metres wide. It apparently arose as a chance seedling at a nursery in northern New South Wales from a batch of weeping bottlebrush (C. viminalis) seedlings. ‘Little John’ is very adaptable in relation to both soil and climate, thriving in most Australian cities. It requires full sun and will stand less-than-perfect drainage. Trim back behind the flowers to stimulate an autumn flush to follow the normal spring blooming.

This compact form of NSW Christmas bush (C. gummiferum) grows to about 5 metres if left untouched (but can be kept much more compact with pruning after flowering) and has glossy green foliage. As well as its more manageable size the outstanding feature of this cultivar is its brilliant floral display in a very bright red. It was selected by renowned horticulturist Mr Peter Albery of New South Wales. It does particularly well on sandy soils but can adapt to clay soils if they have reasonable drainage. It responds well to water and general purpose complete fertilizer through the warmer months. It likes plenty of sun and is somewhat frost-prone making it unsuitable for climates such as Canberra. It is ideal as a small feature tree to provide Christmas cut flowers.

The ever-blooming habit and adaptability of this beautiful ivory flowered grevillea make it a walk up start for the top ten. It is an upright shrub that can reach 8 metres high x several metres wide if unpruned and has large fern-like, olive green foliage. It is reportedly a seedling selection of Grevillea whiteana. It requires an open, sunny position and good drainage to perform at its best as well as fairly vigorous pruning (remove the top third of the plant) after a flush of flowers. A handful of low phosphorous native plant fertilizer in spring is the easiest means of feeding. Regular tip pruning during the first year of establishment will create an

The large red brush shaped flowers that appear all year round are the reason why this plant makes my top ten. It is a small to medium-sized shrub to several metres tall by up to 3 metres wide, with bright green ferny leaves. The bright red flowers, which can be found all year round, are borne in spectacular clusters about 15 cm long. This hybrid arose spontaneously in the garden of Mr David Gordon of Queensland, who named the cultivar in honour of his late daughter Robyn who tragically died of cancer at the age of 16. It is almost certainly a cross between G. banksii from Queensland and G. bipinnatifida from Western Australia This is a very adaptable grevillea, well suited to sub-tropical and temperate climates and tolerates moderate frosts. It grows well in a range of soils from sands to clays and responds brilliantly to light or heavy pruning the latter of which should be done in spring along with a handful of low phosphorous native plant fertilizer. 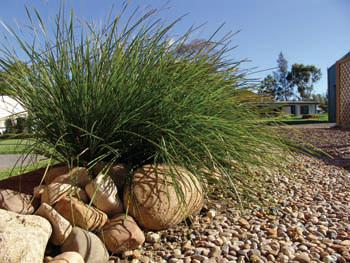 This plant has been the pick of the grass-like native plant cultivars that have been widely planted for the last few years. Its fine leaves and clumping, low maintenance growth habit have made it a favourite due to its utility in the landscape. It produces interesting and sweetly perfumed flowers in spring. It is a fine-leafed form of the widely planted species L. longifolia which was bred by Mr Todd Layt of Windsor NSW. It grows to approximately 60-70 cm in height with a width of 50 cm and adapts well to a wide range of soil types, climates and light levels. It withstands the cold winters of Canberra as well as coping with the searing summers of Perth. A light trim of dead foliage and flowers once a year will keep it looking tidy 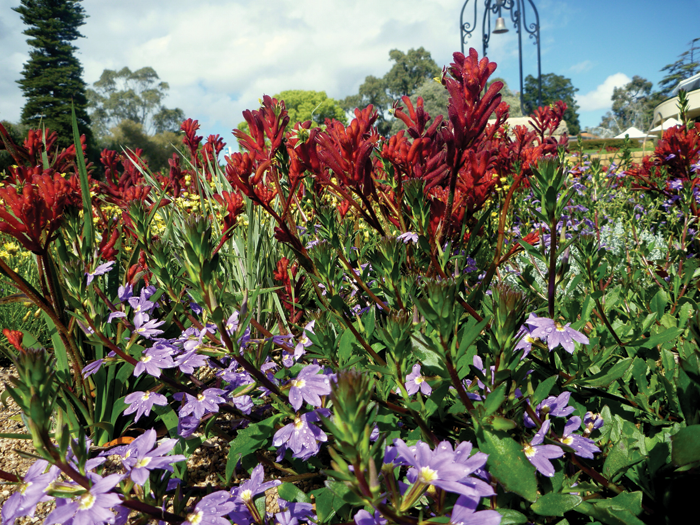 This bright purple fan flower gets a top ten guernsey due to its spectacular floral display which lasts up to 9 months of the year. It is a ground covering plant that can spread to up to a metre and bears large flowers right along every stem. It was selected from a seedling population of scaevolas by Neil Marriott of Stawell in Victoria. It has proven adaptable to coastal climates around Australia with the exception of the far north and has also shown a disliking to heavy frost. A light prune after the initial heavy flush of spring flower stems will keep it looking its best right through to the end of autumn. Give it plenty of sun and a handful of low phosphorous native plant fertilizer at the beginning of spring. It is also an outstanding plant for pots, hanging baskets or rockeries. 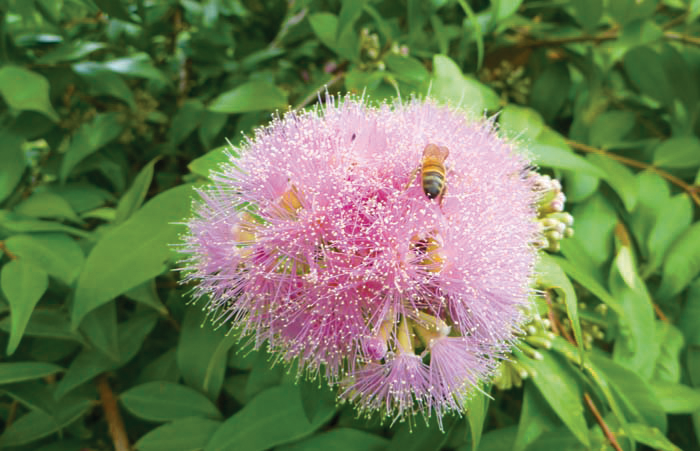 The powder puff pink flowers reaching up to 10 cm in diameter along with the glossy red new foliage and compact growth habit make this lilly pilly my choice for the top ten. It forms a rounded bushy shrub up to 3 m in height by about a metre that can also be shaped into a medium sized hedge if desired. It is a deliberate hybrid between S. luehmannii and S. willsonii created by Mike Jessop of Woombye, QLD. ‘Cascade’ will thrive in either full sun or part shade and will respond to complete general purpose garden fertilizers through the warmer months. It also makes a fantastic tub plant for balcony and patio gardens.