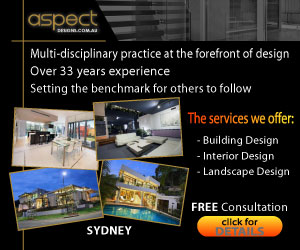 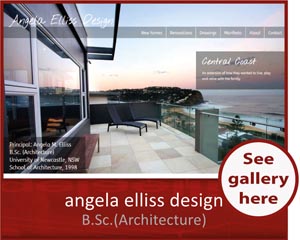 This article gives a brief explanation of some of the architecture styles found in Australian houses. Just as these styles have developed from previous ones, the current styles are also being combined to create new hybrid designs, some of which work better than others.

This style of house has a brick facade (exterior) with timber frames supporting interior walls, usually of gyprock. Roofs are always hipped or gabled and tiled. This style dominated suburban architecture in the 50's - 60's. In its basic form it is a bland and unimaginative style which has been propagated by developers. Due to its familiar and cheap construction, it still is the dominant style in housing estates and many consider the style the scourge of Australian domestic architecture. The basic style can be made much more interesting by rendering and painting, adding more angles, porticos, verandahs, and bay windows. Larger homes (2 stories) of this style have been described as "McMansions". 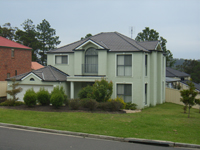 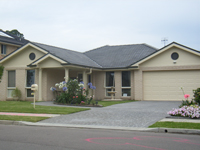 The Timber and Fibro "Fisherman's" Cottage

The original fisherman's cottage was built in many coastal towns between the 30's and 50's. It was originally a simple timber framed structure of one or two rooms and a verandah which was clad with asbestos sheeting. The floors were generally raised on piles. The verandah sometimes had handsome wooden balustrade that was sometimes enclosed to make an additional room or sleep-out. Timber detail around windows and gables were often painted- cheery red being one of the most popular traditional colours.

The original cottages, being relatively cheap to purchase, are now popular for renovation. Construction is easy and owner-building is common. The older buildings require insulation in the ceiling and walls. Timber and fiber cement sheeting now replaces the original asbestos and often the interior is completed gutted to create a modern open plan style of living. Timber strap-work can be used and windows frames painted for effect. 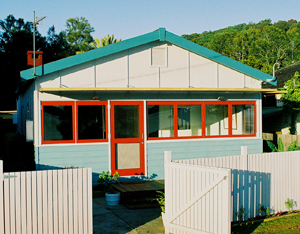 This popular style has emerged from the triple fronted brick veneer. While the house footprint and floor plan may be quite similar, the gabled cottage has a very different feel. In this style the distinctive gabled roof is a dominant design element, and a practical means of providing shade and entertaining space. Constructions can be entirely of brick (often painted), entirely timber, or a combination of brick on the lower part of the house and timber on the upper. Some houses of brick construction have featured verandahs and porticos. Roofs are usually galvanized iron and windows metal framed.

While it is well suited to sloping blocks, this style can also be built on a slab. The use of timber cladding greatly reduces weight and construction costs. 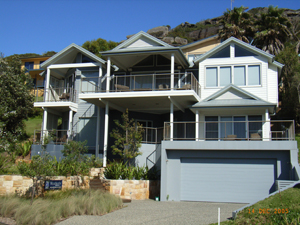 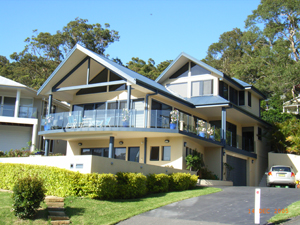 The ranch style became popular in the nineties. It originated in Adelaide and subsequently became popular in regional and coastal NSW. The floor plan is simple and footprint (of at least the street facing section) is often rectangular. Walls are usually brick, or brick and timber, and windows are often colonial style floor-to-ceiling. Roofs usually tiled with extended eaves. The garage was often integrated into the house. Some ranch style houses were boomerang shaped, others were L shaped for corner allotments.

A number of styles have emerged from the influence of architects Phillip Drew and Glen Murcutt. The geometric play of angles is often a signature, likewise the (sometimes exposed) steel framing and corrugated iron cladding which is available in a variety of colours. Fiber cement and timber cladding is often used with the iron to create a sympathetic blend of textures. Being of light weight construction, the steel and corrugated iron approach is relatively cheap and suitable for both flat and steeply inclined land. Interior cladding is most often gyprock but can be timber or even plywood. Butterfly roofs can also be employed quite successfully in this design. This style of house is suited for steel framed pole houses on steep slopes. 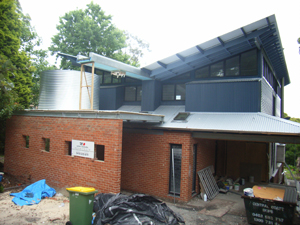 The Pavilion style house is characterized by a simple rectangular, box shaped volumetric style, open plan interior with glass replacing much of the wall space. Windows are often also steel framed. The transparency of the walls makes it well suited for blocks with privacy and/or views. Open patios are an integral part of living area, and like the rooms, they are orientated according to the aspect. Roofs are often low pitched roof and skillion. The style was a favorite of architect Harry Seidler who favoured walls of rendered brick however it is also well suited to a steel, fiber cement, and corrugated iron treatment. This approach often requires the thinness of steel framing to create the desired look. 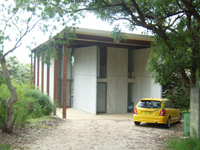 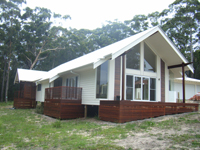 The Queenslander style house is characterized by an all timber painted exterior, a timber stud frame, and a floor raised on piles for air flow in hot climate. They have wide verandahs (often the length of the house and enclosed by shutters, and roofs are gabled and corrugated iron. The street facing view is often symmetrical. The NSW Queenslander is often smaller than the original classic Queenslander and is less decorative - probably due to limited supply of delicate timber detail and trades-people to build them. It is sometimes combined with the Ranch style house.

Each of these styles has a different emphasis to practicality (physical needs, layout, and views), land and environmental considerations (structural requirements for foundations, design for weather protection) and aesthetic considerations (planar, volumetric, and sculptural form, emotional and spiritual qualities.) All of these requirements and qualities should be considered when designing a house. 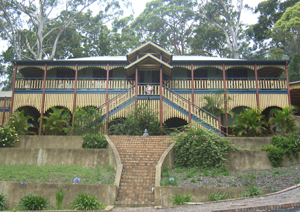