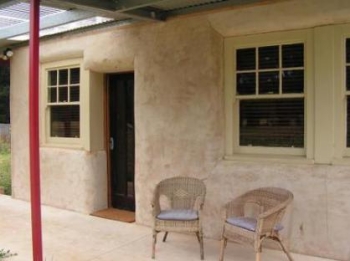 Home builders have experimented with building materials since history began. Strawbale houses built with small square bales originated in Nebraska, soon after the mechanical baler was invented. Nebraska was plains country with very little trees for building so someone with imagination saw a way to use these big bricks for construction. Nebraska style and load-bearing style are interchangeable terms meaning the same thing. Most houses being built are non-load bearing, in fact we have helped people build over seventy houses and not one has been load-bearing.

In Nebraska, in the United States, many strawbale houses over hundred years old are still being used as homes. An American magazine called The last straw had an article about how some of these houses were tracked down and checked for straw quality within the walls - the straw was as good as the day it was put in. Strawbale buildings stand the test of time.

Environmentally Friendly
Strawbale houses are environmentally friendly on several different levels. Straw is a waste product which normally gets burnt adding to greenhouse gases. Straw is also a renewable product grown in one season.

The insulation properties in the bales means extra insulation does not have to be added to the walls reducing materials in the building process and energy used to make them. The insulation afforded by strawbales also reduces heating and cooling costs but also reduces greenhouse gas emissions from the power generation no longer required. Each Strawbale house quite literally saves tonnes of greenhouse gases from polluting the environment every year.

Financially Friendly
Strawbale houses promote financial savings on heating and cooling up to $1200 -$2500 per year. If the money saved in heating and cooling (on average, $1500) was put into the mortgage of the average home loan, roughly three and a half years off the term of the loan could be saved, that's more than $60,000!

As we are already feeling the affects of global warming with average summer temperatures going up and power prices never seem to go down, it is inevitable that cooling normal houses is going to become even more expensive, therefore strawbale houses is a viable economic option.

Strawbale houses can look the way you want them to look and lend themselves to nearly all style of house design. The finish of a strawbale house has be seen to be far superior to the average mud brick house and appeals to a much wider market if ever you have to sell. The large window ledges and curved corners appeal to a lot of people. See more examples of strawbale houses...

Slab on ground is now being used more than timber floors with sub floors as it is easier to pass the five star energy rating and easier to build so most architects are going this way. Next a post and beam frame is erected and the roof pitched, the roof is then clad giving a nice protected area to store the bales ready for building.

A load bearing house does not have a frame and is possible but cost about the same and causes complications in the design and construction. Most importantly I think is the limitations on the shape of the house and the amount of openings allowed in any wall section which hampers solar passive design. 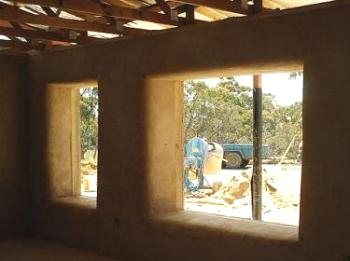 Bales are then stacked, compressed, knocked into place, trimmed, wired and made ready for rendering. Stacking is done in a running bond fashion the same as brick, but because the bales are so much bigger some rules exist to make the wall stronger and easier to build. The major rule is to always start stacking in the corners and work away from them. Compressing the walls makes them very rigid and by tying them into the frame they act as bracing. These rigid walls are also easier to knock into shape. A whipper snipper is used to take any fluff off the bales which helps to show where any bumps or hollows are in the wall and makes rendering easier.

Depending on the type of render used chicken wire may be wrapped around the house or not. Finer mesh should always be used around door and window openings.

Rendering is where the hard work really begins as the average house takes 35 to 55 tonnes of wet render. Rendering should be done in three coats with base and second coat left to dry enough to allow for any cracking to happen before top coat so that top coat can be done without cracking.

Cement based renders where obviously the render mix is similar to mortar. These renders do not breathe as well as the others and need to have heavy chicken wire to help control the expansion and contraction characteristics they exhibit. They expand and contract 10 parts per million per degree centigrade which is similar to steel. Obviously this can lead to cracking but many houses are rendered with cement based renders without any signs of cracking after many years of service.

Earthen renders are clay and or mud based with dirt and sand. They are more environmentally friendly and breathe well but crack a lot due to the clay content. The other major disadvantage is dusting on the inside and weather damage on the outside meaning some sort of sealant to stop dusting and having to re-render the outside when damaged. The sealants that stop dusting can also affect the breath ability of the walls.

Lime renders are basically lime and sand. They exhibit excellent breath ability, are stable with temperature fluctuations and show flexibility to move with the building. They do not weather like earthen renders but are still very environmentally friendly. If you had to invent a product to go over strawbales this would be about as close as you could get. They set by absorbing carbon from the atmosphere and their only disadvantage is a slow setting time in really cold locations where the temperature does not get above approximately 7 degrees.

I have mentioned the word breathability a lot here so I should give a brief description of its importance. All masonry walls whether they be stone, brick or rendered strawbale need to breathe to stop moisture from accumulating in the walls. Sealing walls is not the answer as it impedes the moisture from escaping. Sealing can actually cause failures.

Straw used for building is generally wheaten but critical, rice and barley are also good. The right compression and density are important, we get our bales from many different suppliers who all know how to make construction quality bales. Some architects like to design wall lengths in multiples of 450mm or 900mm to fit strawbales but it is not necessary as bales are not all 900mm long in fact most are not and custom length bales are easy to make. 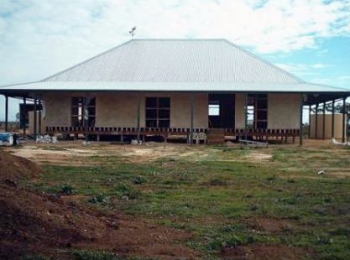 If you are going to build a house from scratch then design it to be solar passive and allow for eaves about 600mm wide. We give free consultancy on plans and like to become involved at this stage so that we can point out what will and will not work with the frame design. Frame design is critical to how easy it is to build a strawbale house and a frame that is set up wrong creates a lot of problems with stacking and rendering which takes more time and therefore money to do. Steel shed frames end up costing more than a conventional post and beam.

Also, some architects will advocate double story and say that it is cheaper to build but we have not found this to be so.