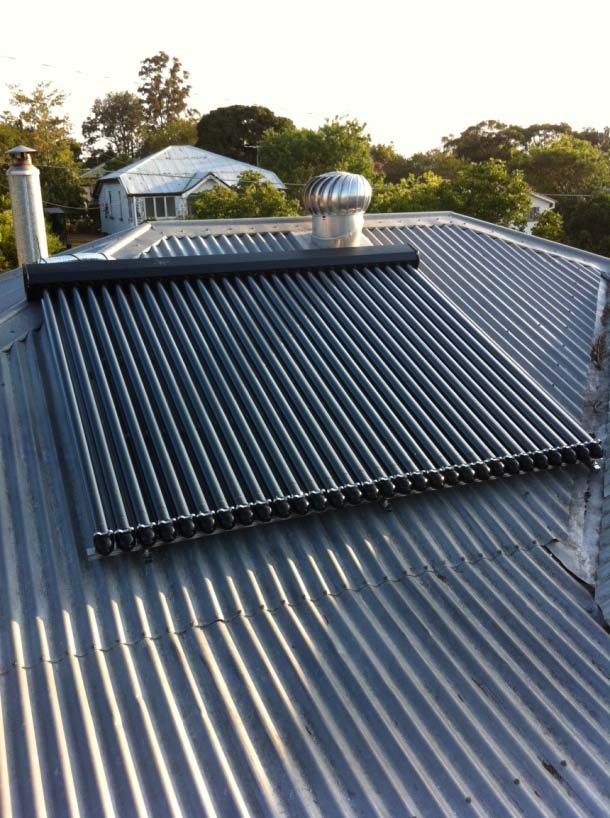 Government subsidies and rebates in Australia ensure that solar powered hot water systems are price-competitive and that cost-savings, over time, will overtake the costs of purchase and installation.

However, subsidies and rebates are being wound back. Nevertheless, it is expected that increasing efficiency and new technological advances will ensure that solar powered systems will continue to be a cost saving alternative.

Currently there are still financial incentives in every state as explained in the Small Scale Renewable Energy Scheme.

Environmental: It is estimated that renewable systems such as solar photovoltaics and solar hot water prevent an extra 7 million tonnes of carbon being released into the atmosphere every year and Australians, per capita, expel more carbon dioxide into the air than any other developed nation. By using solar power you help improve this statistic.

Self-sufficiency during power-outages and in in remote areas.

There are several different systems for solar hot water generation. They all work in different ways and have their own advantages and disadvantages.

Note: To provide hot water on cloudy days or when demand exceeds supply, most systems come with a backup gas or electric booster. 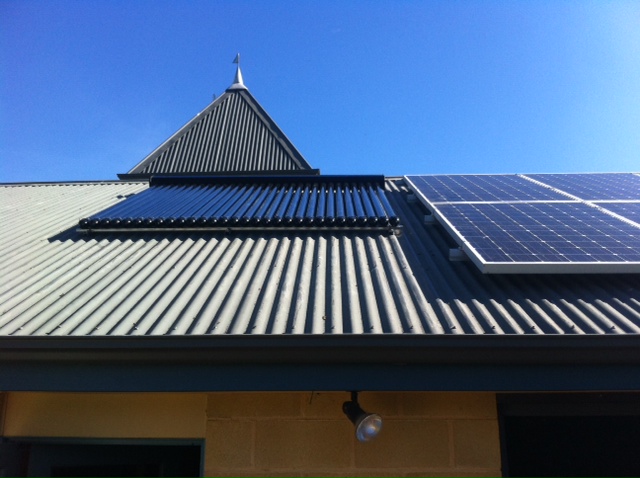 The electricity created by photovoltaic cells can be utilised for many things, one of which is heating hot water.

The downside of this method is that electricity is only produced when the sun shines. This can be offset either by storing the energy in batteries or by heating the water while the power is being generated and then storing it in a well insulated tank, as in off-peak electric systems.

The cost of photovoltaic versus solar hot water heaters for heating water depends on a few factors. If you consider a system of panels purchased just for heating water, the cost per watt would be around four times that of thermal heating . But the big advantage of a photovoltaic system is that excess power can be fed back into the grid. This will offset any power from the grid that may be used later to heat the water in rainy or dark periods.

Flat plate collector systems were developed in the 1950s and are very common. A flat plate collector system has a transparent cover that allows the sun's energy to pass through but minimises energy loss. It also has a dark flat plate that absorbs solar energy, tubes of fluid that take heat from the absorber plate, and insulated backing. The tubes can be filled with water, antifreeze or, less commonly, air. If the tubes are filled with the the water that will be directly used within the household the the system is considered open loop.

In a closed loop system, the tubes are filled with antifreeze or air. The water to be heated is circulated around the tubes, picking up their heat. Once the water is heated sufficiently, it is then piped into a collection tank. You can have a collection tank situated above the solar collector on the roof.

These systems do not need electric pumps because they rely on the fact that hot water will rise, so as the water is heated, it rises up into the tank above it. This is known as a thermosiphon system.

For a thermosiphon system you need to be sure that your roof can take the weight of a tank of water. For less sturdy roof structures the heated water can be pumped into a storage tank. One advantage of the thermosiphon system is that there are no moving parts or parts that can break down.

A disadvantage of flat plate collectors versus evacuated tubes (see below) is that they lose more heat to the environment. The system you choose to use will depend on which area of Australia you live in. In very warm and predominantly sunny areas the heat loss may not be significant, but in areas that are cooler and have more cloudy days, evacuated tube systems would be a better choice. 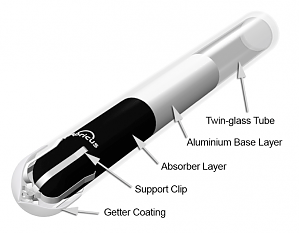 An evacuated tube system is another form of solar technology, but it works on an entirely different principle. The evacuated tubes heats up in the sun and transfers their heat to a water source.

The glass cylinders that make up the system allow the sun's energy to pass through and directly heat a metal layer underneath. The glass is double-layered and their is a vacuum between the layers that acts as a barrier that prevents heat loss.

As the glass tubes increase in temperature water is passed through, transferring heat from the cylinder to the water, which is then pumped to a storage tank.

The hot water can be stored in the insulated tank for up to three days before it cools to ambient temperature.

Evacuated tubes deliver more energy when the ambient temperature is low. They continue to work even on cloudy days. An evacuated tube system will even work in snowy regions or areas with less exposure to sunlight, albeit less effectively.

Evacuated tube systems are more efficient per square metre. This is important when there is limited roof space.

Most solar hot water systems come with a backup hot water heater, therefore even if there are several days of continuous rain, hot water will still be available. The backup heater can be powered by gas or electricity.

Booster systems located inside storage tanks can be inefficient unless override switches and timers are also incorporated. Another method is to use an in-line gas booster, which works like an instantaneous water heater. This will only cut in and start working when the water temperature is too low, thus maximising the use of solar energy.

Most individuals use approximately 50 to 60 litres of hot water per day. Thus a 300 litre tank will more than meet the needs of most households.

In 2008 Choice Magazine's "shadow shopper" called for quotes from 10 retailers listed in the Yellow Pages and received quotes ranging from $3900 to $9640. Installation costs were usually included and added from $100 to $1600 to the base price.