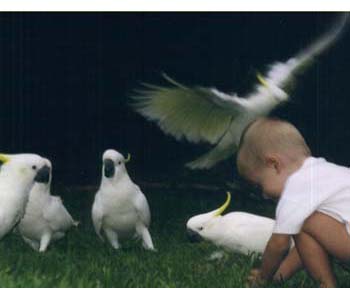 Sulphur Crested Cockatoos in the backyard

For those who want to completely immerse themselves in the experience of creating a truly Australian garden the scene is completed by the element of delight and surprise created by the visits of our unique Australian animals. We can take this a step further by making a whole ecosystem such that various species actually make their home in your garden, allowing you to observe all kinds of intimate moments.

Australia has an array of beautiful birds that is second to none. Providing an urban habitat for these colourful creatures not only makes for hours of fascinating viewing, but also allows us to participate in the conservation of this unique part of our living heritage.

While it tends to be the big, showy birds such as lorikeets, rosellas and cockatoos that capture most attention there is an almost endless array of smaller birds that can find a niche in our gardens. In order to attract as wide a range of bird species as possible we need to create a habitat garden that will provide food, water and shelter for birds of all sizes. 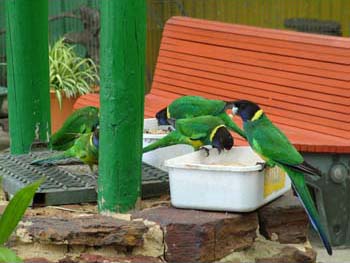 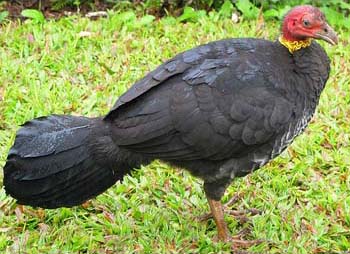 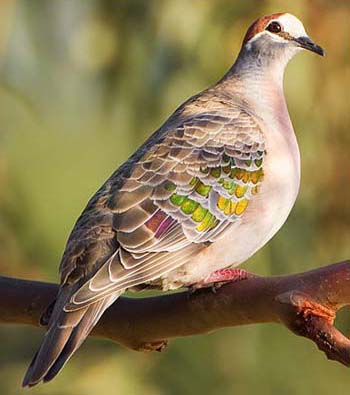 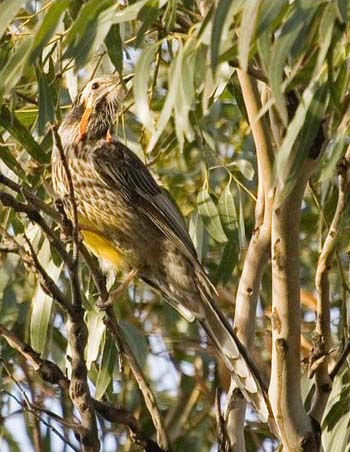 Nectar feeding birds such as rainbow lorikeets, honeyeaters and wattlebirds are very spectacular as well as being some of the easiest species to attract to your garden on a daily basis. There is a huge range of plants that can be used to attract these nectar feeders including banksias, bottlebrushes, eucalypts, grevilleas, kangaroo paws and waratahs. The added bonus that all these plants have in common is that they all have very spectacular flowers (usually red in colour) to stand out in the crowd for the birds.

Seed eating birds such as galahs, gang-gang cockatoos, rosellas and bronze-wing pigeons can be a little more elusive and seasonal due to the nature of their food source. Plants that fruit prolifically such as acacias, lillypillies, banksias, sheoaks (Casuarina species), eucalypts, grevilleas and native grasses such as kangaroo grass (Themeda triandra). The process can be encouraged by supplementing the natural food source with some extra seed to bridge any gaps. Many seed eating birds also eat insects and can be very useful in creating an ecological balance that can eliminate the need to use chemical pest controls.

Whatever sorts of birds you wish to attract to your garden the frequency of their visits will be encouraged by also providing suitable shelter, safety from predators (such as cats) and a water source as well. A high vantage point such as a tree (or a pole if your garden is too small for trees) will give any passing birds a safe haven to survey the safety and suitability of your garden. If the birds are to be convinced to extend their stay then it is a good idea to provide suitable shelter such as a copse of spiny plants such as prickly Moses (Acacia ulicifolia), spike wattle (A. oxycedrus) and Grevillea juniperina.

Some of our fascinating and unusual ground dwelling birds such as lyre birds, brush turkeys and bower birds can also be commonly found in gardens adjoining bushland reserves. Such species are especially vulnerable to predation so particular care should be taken to guard against cats and dogs. Be prepared, however, to make many compromises should these unique birds choose to build their nests in your garden as they can create havoc, especially in gardens where there are a lot of new plantings that can be dug out.

Water sources for birds can be as simple as a regularly filled bowls and bird baths through to elaborate water features such as landscaped ponds complete with plantings such as rushes and sedges that will create a habitat for a diversity of species such as azure kingfishers, grebes, kookaburras and white faced herons. Additional features such as logs and boulders will provide landings to complete the habitat. If you are going to this much trouble then also ensure that any neighbourhood cats are suitably attired with bells and are controlled by their owners.

Imagine the pleasure of sharing your garden with a koala. These wonderful marsupials seem to be on the increase in certain areas (particularly in country areas of eastern Australia that are linked with pockets of remnant bushland or National Park) and there is no reason they cannot be regular visitors to your garden if you are lucky enough to live in such an area. One of the myths of koalas is that they only eat a single species of gum tree when in fact there are over 20 species that have been recorded as food sources in different eastern states including blackbutt (Eucalyptus pilularis), Sydney blue gum (E. saligna), swamp mahogany (E. botryoides), Tasmanian blue gum (E. globulus) and spotted gum (Corymbia maculata).

Possums such as brushy tails, sugar gliders and ringtails are particularly common in suburban areas and unfortunately can become a nuisance if they choose to nest in your ceiling. The trick is to provide an appropriate habitat in your garden such as a nice dense lillypilly such as Acmena smithii. It should also be said that backyard fruit trees can often bring possums into conflict with gardeners as these animals have a rather sweet tooth and find particularly stone fruits an irresistible attraction.

Gardens in areas adjacent to bushland reserves will also attract some of our other distinctive marsupials such as wallabies, wombats and bandicoots. Once again these animals can cause a degree of havoc in the garden as they go about their business and it may be necessary to fence certain areas if they become a little bit too familiar. However, the joy of seeing such creatures visiting your backyard in an uninhibited fashion makes it worthwhile to sustain some damage. Once again the provision of dense copses of vegetation will help to encourage such creatures. 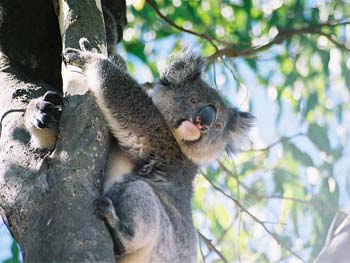 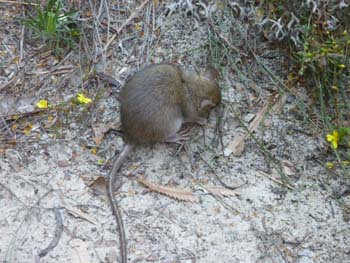 Koala and an unidentified marsupial (perhaps a Bush Rat or Bogal)

While reptiles such as snakes are generally not welcomed in the garden for obvious reasons, there are others such as blue-tongued lizards that can do a great deal of good as they eat pests such as snails and slugs. Water dragons can take up residence in areas with permanent water features and can be admired as they sun themselves on a summer’s day. Smaller lizards such as the various species of skinks are voracious feeders on insects and will help enormously to establish a balance that will eliminate the need for chemical pest control. The types of lizards you may want to attract will find a permanent home in your garden if you provide them with suitable crevices created with rocks and old logs. 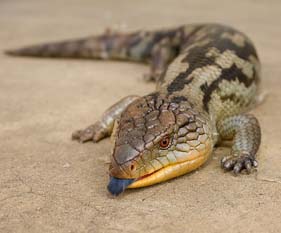 Butterflies, other insects and arachnids 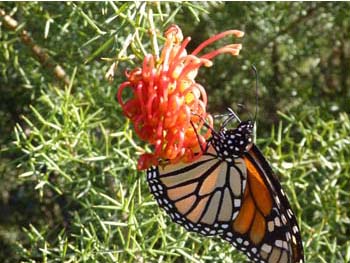 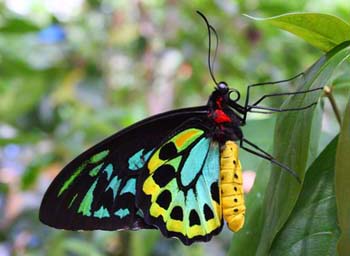 Australia has some of the world’s most beautiful butterflies and attracting them to your garden is yet another simple pleasure of having native plants in your garden. It is even possible to have butterflies without the ensuing caterpillars if we choose species that the adults feed on rather than those they lay their eggs on as a food source for the larvae. Butterflies tend to feed on the various native daisies (eg everlastings and brachyscomes), pea flowers and a variety of smaller tubular flowers such as pimeleas and trigger plants (Stylidium species).

Food plants for the butterfly larvae will attract very specific species. For instance, the rare and extremely beautiful Richmond birdwing butterfly feeds on a native species of Aristolochia. This plant has been propagated and promoted by various NSW and Queensland nurseries so that home gardeners can partake in the process of rescuing this spectacular butterfly from extinction. As well as butterflies, moths such as the emperor gum moth with its pinkish wings punctuated by dazzling blue eyespots are also worth looking out for. Their larvae are large greenish-blue caterpillars covered in fascinating red and blue spines that feed on various eucalypts such as E. leucoxylon and E. nicholi as well as the brush box (Lophostemon confertus).

Jewel beetles certainly live up to their name with the various species creating iridescent rainbows amongst the flowers and foliage of plants such as the Norfolk Island hibiscus (Lagunaria patersonii) and fluffy-flowering plants such as melaleucas and eucalypts. Christmas beetles often create spectacular swarms in summer with their iridescent multi-coloured bodies. They can cause significant defoliation of a range of eucalypts, however, the trees generally are able to recover without long-term damage.

While spiders can create a chill for some there are some intricately beautiful species such as the orb weavers that have large patterned bodies and symmetrically interesting webs. Provided one is not walking into the web by accident there is little to fear from these creatures and indeed they can also contribute to the process of controlling pest insects.

Rare species such as the green and gold bell frog have been known to colonise gardens and environmental scientists regard the presence of frog colonies as very good indicators of environmental good health. Obviously these interesting creatures will need a permanent water feature to become a fixture in your habitat garden.

One of the useful things about attracting fauna to your garden is that it can be as simple as planting a suitable species in your garden right through to creation of a whole habitat. The Australian nursery industry has made it even simpler through a campaign known as ‘Flora for Fauna’ that involves labelling and education of gardeners into the species they can plant to attract the different classes of fauna and how to go about the process of creating a habitat garden. 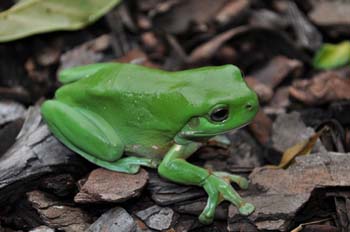 Dealing with possums in the garden.