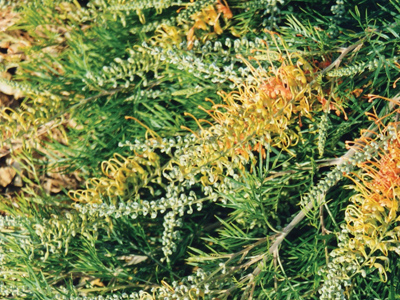 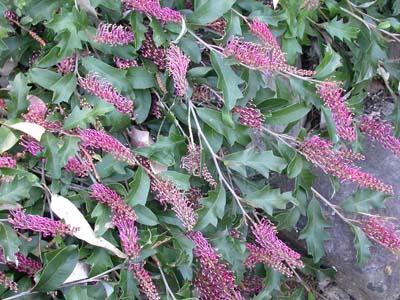 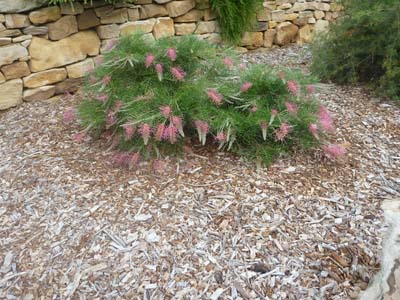 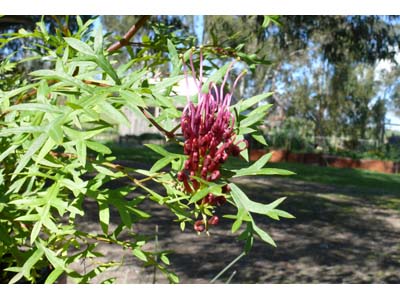 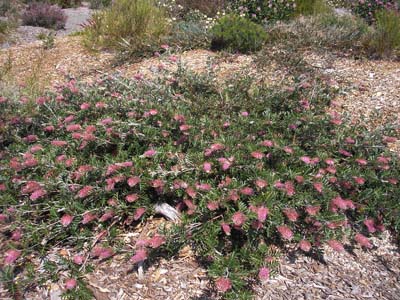 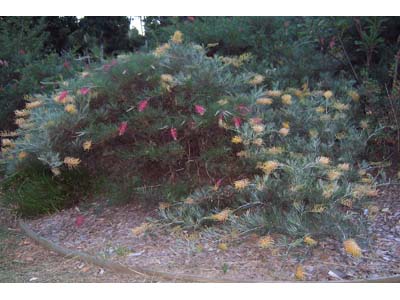 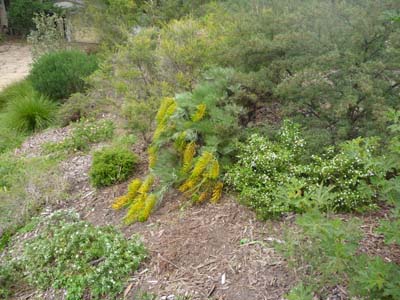 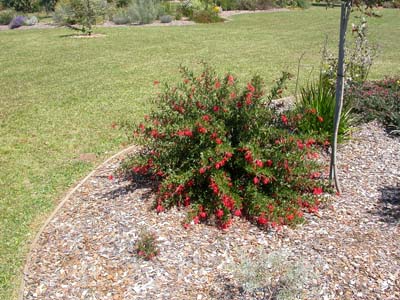 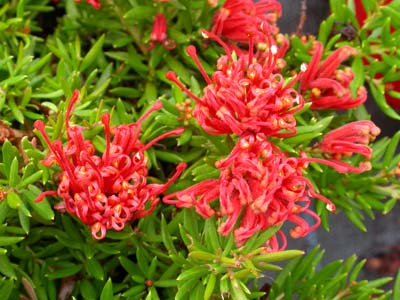 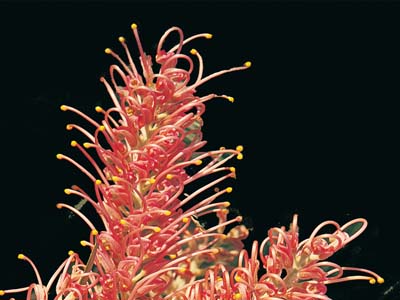 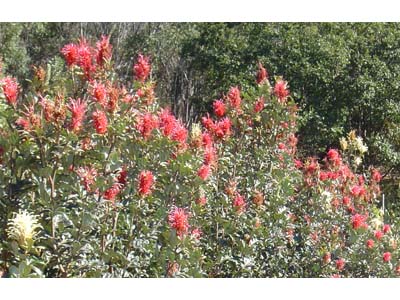 Grevilleas are without doubt the most exciting group of Australian plants for the garden. As well as the delicate and intricate flowers which appear all year round on some varieties there is the added attraction of observing the avian pollinators such as lorikeets, rosellas, honeyeaters and many other birds. The delightful diversity of this group provides a grevillea for every climate and position in the garden. In fact it is eminently possible to design a whole garden based on the hundreds of grevilleas available to the gardening public.

From ground covers to small trees and every size in between one is almost paralysed by choice. Every colour except true blue is represented in the colour palette even black in the rare Grevillea scortechinii. The individual flowers have an architecture that is superbly adapted to the nectar feeding birds that pollinate them. Those flowers in turn can be arranged in a number of ways such as the aptly named spider flower group to the one-sided ‘toothbrush’ flowerhead or the large ‘brush’ type flower heads of well known cultivars such as ‘Robyn Gordon’.

Grevilleas come from a wide variety of wild habitats from the snow covered slopes of the Australian Alps to subtropical rainforests in coastal Queensland to exposed coastal heaths and headlands, but perhaps most commonly in dry eucalypt forests in all states of Australia. For the vast majority of grevilleas a well drained soil in full sun to light shade is the ideal situation

Grevilleas are sensitive to excessive levels of phosphorus in the soil so it is particularly important to select a native plant food when preparing a planting hole for a new grevillea planting. Care should also be taken if you are adding compost to the hole as the ingredients used to make the compost can result in phosphorus levels that may be harmful. Purchased composts should carry a warning if they contain phosphorus levels that are too high for grevilleas and other proteaceae. Grevilleas are generally happy in any soil that provides reasonably good drainage.

Among the hundreds of grevilleas there is at least one for every climatic zone in the country from the sub-alpine to the tropical north.

Grevilleas generally grow best in light shade to full sun although they can be used as screen plants in shadier spots, but do not expect them to flower at their peak.

Most soils with reasonably good drainage will be suitable for a wide range of grevilleas.

Grevilleas are sensitive to even moderate amounts of phosphorus in the soil and if not managed carefully this can be fatal. It is therefore important to avoid fertilisers with a phosphorus level more than 2-3% as can be seen from the ‘P’ percentage in the N:P:K analysis that most fertiliser products are labelled with. Care should also be taken with organic fertilsiers such as blood and bone and chicken manure based products as these too can have phosphorus levels that are too high for grevilleas. If in doubt use a product that is specifically for native plants as these are guaranteed to have the right phosphorus levels.

Grevilleas respond very well to pruning and will tend to become open and leggy if left to their own devices. Tip pruning plants at planting time and during the first few years of their life will develop a sturdy, bushy plant that is better able to resist blowing over in severe storms. Grevilleas that have been let go can be reshaped with the ideal time to prune being when the plant is in active growth during the warmer months of the year and ideally after a heavy flush of flowers. As many grevilleas have a reasonable vase life an ideal way to prune is by cutting stems for cut flowers.

Most grevilleas can be propagated from cuttings, however, they are generally not easy to strike. Well formed shoot tips are the best material to use but they should be semi-hardened rather than being very soft sappy growth that will wilt too easily. Cuttings should be 5-10cm long (longer for larger leafed types) with the leaves removed from all the nodes on the lower half of the cutting. A rooting hormone will greatly speed up root formation as will wounding the cutting by scraping the outer tissue off one side of the bottom centimetre of the cutting.

Many grevilleas, both species and hybrids will set seed and new plants can be raised from these. It is quite likely, however, that the resulting plants may be different to the parent plant as grevilleas will readily hybridise with other grevilleas growing nearby, ably assisted by the various bird pollinators that may be visiting. Seed can be collected by placing an old stocking over the developing seed head and simply collecting it when the seed has been shed. It can be sown in a normal potting mix and buried with about a cm of mix. Transplant the seedlings into a larger pot as soon as they are big enough to handle.

Grevilleas are relatively trouble free compared to many other ornamental plants. Perhaps the biggest issue is root rot which can result in the sudden death of plants that appear to be thriving. The best way to deal with this problem is to try and avoid it by selecting grevilleas that are well matched to your climate and also by planting into well drained soils. There are a number of minor insect pests and fungal leaf spots that can cause disfigurement, however natural predators will usually negate the need for the use of toxic sprays. In addition pruning of damaged growth will usually stimulate a healthy burst of new growth.

The silky oak (G. robusta) which normally grows into a tree makes an ideal rootstock for the creation of grevillea standards. Silky oak seedlings are grown with a single stem that is allowed to reach a pre-determined height, usually a couple of metres. Onto the top of this stem is then grafted a ground covering type such as G. ‘Poorinda Royal Mantle’ which then grows and spills over to form what is affectionately known as a weeping standard.

‘Moonlight’ Amongst the large flowered grevilleas this creamy white flowered cultivar has established itself as a year round bloomer in a range of climates and soil types. It will form a small tree if left unpruned but regular pruning will provide cut flowers for the house as well as keeping a more compact shape.

‘Superb’ This ‘Robyn Gordon’ look-alike has the same parentage but is a more vigorous plant with aa yellowish tinge to the red flower heads. It is a very adaptable plant that thrives from Brisbane to Melbourne.