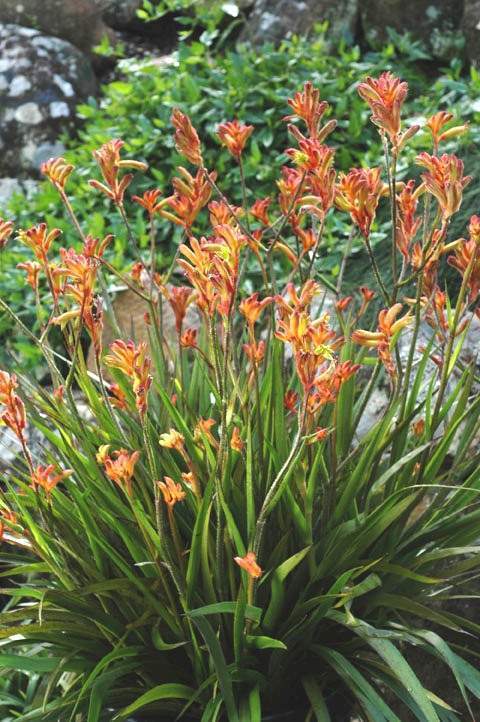 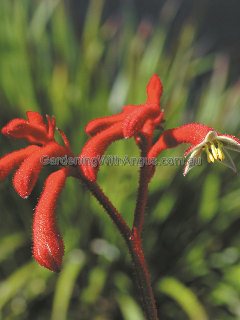 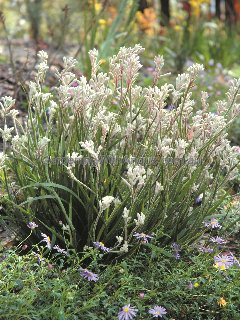 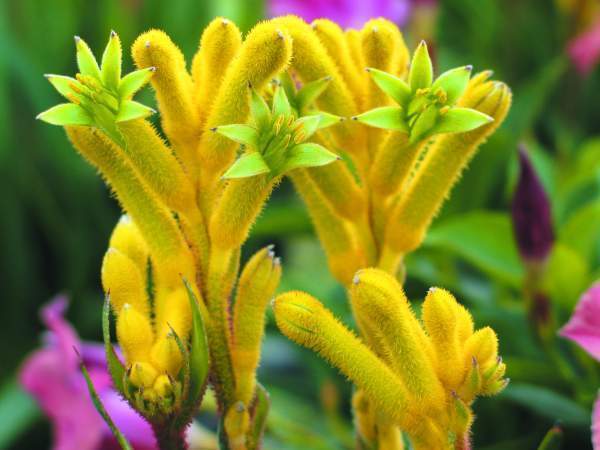 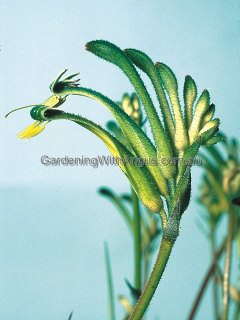 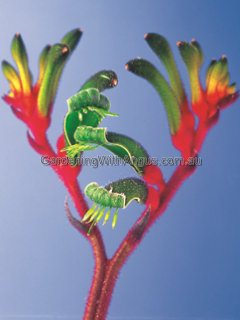 This remarkable group of Australian plants typifies what is unique about many of our native plants. They have vibrant, almost iridescent flower colours combined with an amazing, furry texture provided by the hairs that cover the flowers and stems (and incidentally provide the colour for the blooms). Another oddity is the way the colour varies according to temperature with far more intense shades being produced at low temperatures for a given variety. Thus the same kangaroo paw can look completely different in flower in different environments.

Kangaroo paws also typify the frustrations of growing many of our native plants in that many varieties can be rather unreliable in cultivation. In spite of all that, kangaroo paws are now well established as garden plants, particularly the many named hybrids that have been released over the last 25 years. Having been one of the breeders responsible for a number of the new cultivars I would like to give you my perspective on how to choose the right kangaroo paw for your own garden.

I would divide the kangaroo paws into three groups for cultivation in the garden. These are explained below.

These cultivars are long term perennial garden plants. There are two basic types within this group. Firstly, hybrids between Anigozanthos flavidus and Anigozanthos pulcherrimus which give yellow, red and yellow and orange flower tones. Secondly, the Anigozanthos flavidus x rufus group which are burgundy to bright red or orange red in colour. All of these hybrids are long-lived, I have seen them go on for over 20 years as garden plants if the clumps are divided every few years to maintain their vigour. The plants in this group are not only very vigorous growers but are also resistant to the fungal leaf rust disease and are also generally tolerant of the other major fungal leaf spot in kangaroo paws caused by the fungus Alternaria as well as crown rot diseases that kill many of the shorter kangaroo paw species and cultivars in garden situations. I have bred the following cultivars which I can recommend, Bush Pioneer, Bush Endeavour and Bush Revolution photos and links to database

There are many new cultivars based on breeding between the species A. flavidus (which confers a degree of adaptability on hybrids) with other smaller growing species that are naturally short-lived. These species include A. humilis, A. bicolor, A. gabrielae and others. Because the second parent usually only lives for a maximum of a couple of years, these hybrids also tend to take on this characteristic which makes them short-lived in the garden even though they are technically perennial plants. So it is best to think of these cultivars as plants that will flower their heads off for their short lives, but then will need to be replaced within a few years.

Another strength of the shorter cultivars is their long flowering; with a number of them flowering all year round in frost free conditions e.g. Anigozanthos 'Bush Pearl' and 'Bush Diamond' photos and links to database.

An outstanding way to grow these cultivars is as container plants. Grown in a good quality potting mix, you can have a plant with 50 or more flower stems that can be moved around the garden for maximum effect. These stems can also be cut for indoor arrangements as well.

There are twelve species of Kangaroo Paws and every one of them is worth growing. Each one has its own unique beauty from the diminutive red and green flowered Anigozanthos gabrielae which flower stems only a few cm tall to the gigantic forms of the Tall Kangaroo Paw (A. flavidus) which can have flower stems over 3 metres in height. Then there is the bizarre Black Kangaroo Paw (Macropidia fuliginosa) that provides a real ‘wow’ factor or the Albany Catspaw (A. preissii) with its spectacular claw-like flowers. Then of course there is the floral emblem of Western Australia, the Red and Green Kangaroo Paw (A. manglesii) which comes in a host of other colour schemes than the iconic fiery red and emerald green. I recommend the cultivar Bush Eclipse photos and links to database

As mentioned above, the different types of Kangaroo Paws vary enormously in their ease of cultivation. Unless you are prepared to give them some tender loving care it is best to stick to the taller types of Kangaroo Paws that have flower stems around the 2 metre mark. This type will generally perform well over a wide range of conditions with the exception of areas that receive heavy frosts (a comment that applies to all the other types of Paws as well). Maintenance of these taller Paws is simple, they can be completely chopped back to ground level each year to really clean up any dead or blackened foliage.

A handy tip to prolong the flowering season of the taller Kangaroo Paws is to cut the top half of the flower stem out as soon as the first flower opens and use it indoors as a cut flower. Its removal stimulates the growth of dormant flower buds that are still on the bottom half of the flower stem that remains on the plant. These dormant buds develop into side branches that extend the flowering period for at least another month or two. These types flower from late spring to mid-summer but this can be prolonged well into summer with this technique.

The maintenance of the smaller hybrid cultivars requires a bit more work to maximise their relatively short lives. Each flower stem arises from a leaf fan that is comprised usually of 6 leaves which will gradually die and turn black as the flowers finish. A number of dwarf Paws such as ‘Bush Pearl’ and ‘Bush Diamond’ flower all year Rather than cutting the whole plant back to ground level it is best to remove the spent flower stems one at a time as a savage cutback all at once will often kill the plant. As you remove the stems one by one, also ensure that you take the old leaves that are associated with them.

When it comes to growing the wild species, with the exception of the Tall Kangaroo Paw (A. flavidus), all other species tend not to be long-lived plants in the garden, particularly if drainage is poor. Give them a well-drained position with as much sun as possible such as a rockery. Otherwise they can be grown quite happily in containers, where I have had them flower well for ten years or more. The tip with pots is a free draining mix but plenty of food and water while the plants are actively growing and flowering. The flower stems are very succulent while they are developing and do not take kindly to moisture stress.

How to use Kangaroo Paws in the garden

It is hard to past Kangaroo Paws for providing a vibrant splash of colour in either pots or garden beds. The crucial point is to select the right variety for your purpose. The shorter varieties tend to be short-lived in the garden but can provide a spectacular display in a feature garden bed, particularly if you have a smaller garden, and of course they are also fabulous in pots. Put simply, the dwarf varieties will pump out copious colour and then cark it.

If you want a more permanent display of Kangaroo Paws, then the tall varieties are ideal and can go on for many years in most areas of Australia, although they will struggle in heavy frosts it must be said. Placed at the back of garden beds, they are a perfect backdrop for low growing plants of either contrasting or complementary colours. All kangaroo paws but especially the tall varieties will also provide long-lived cut flowers for the home.

Attracting birds to your garden with kangaroo paws

The tubular flowers of Kangaroo Paws are adapted for pollination by birds with long beaks seeking nectar so place them in the garden in positions where you will ideally be able to get a close look at the delicate Spinebills and Honeyeaters that will seek out the flowers in many parts of Australia. Placing them near the windows of your house or outdoor decking where you can sit still and observe over a period of time will bring you a wonderful wildlife reward.