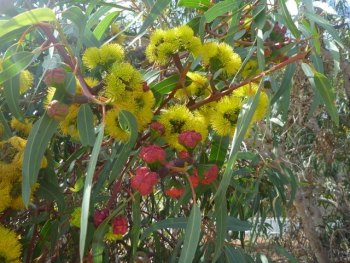 Eucalypts and their relatives vary enormously in growth habit from the tallest flowering trees in the world, namely the mountain ash (Eucalyptus regnans), to dwarf multi-trunked mallee types that are obviously much better suited to garden situations. When selecting gum trees for gardens there are a number of smaller species listed in this article that will suit smaller areas. In any case it is best to site the taller species well away from buildings (at least 10 metres) to prevent any possibility of damage to foundations. The presence of eucalyptus oil in the leaves also makes them a hazard under extreme bushfire conditions, another reason to site them well away from buildings.

Most eucalypts are very fast growing and will respond well to supplementary watering and regular feeding (most are not phosphorus sensitive and can be fed with general purpose complete garden fertilizers). They are, of course, also great survivors in the absence of food and water but this will naturally slow down their growth rate. Whilst they will survive quite happily without mulch, a layer of leaf litter or wood chip will certainly be beneficial as will an absence of lawn around the tree. Most species do not need to be pruned unless you wish to encourage a multi-trunked mallee habit (certain species are better suited to this idea than others). Some of our recommended gums provide beautiful foliage that is perfect filler for flower arrangements and cutting branch tips for this purpose will create a dense and attractive blue canopy in suitable species.

It is important for gardeners to be aware that the majority of gum trees grown for the nursery industry are from seed which results in a considerable amount of genetic variability in the progeny. This means that important characteristics such as flower colour and tree height are often unpredictable. The only way to be certain of the tree's exact potential is to obtain a grafted specimen. This is possible for certain species such as the red flowering gum where brilliant colour forms have been selected by nurseries and grafted onto a suitable rootstock. 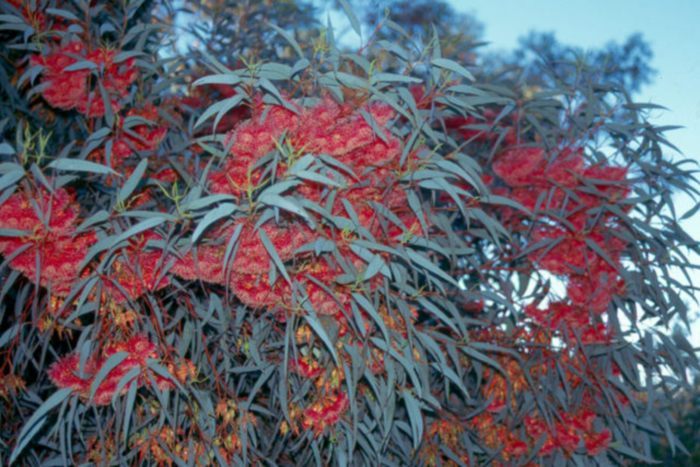 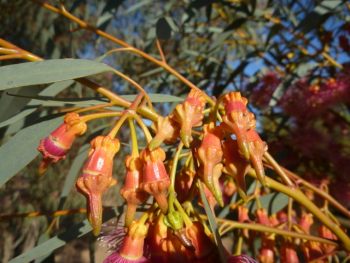 The rather sculptural corrugated base of the buds and gum nuts is unusual in the eucalypts and is a rather ornamental and distinctive feature of this species along with the truly breathtaking floral displays this variable species is capable of. This is usually a small tree to about 6-12 metres in height by 5-10 metres in width.

A hybrid variety with E. woodwardii called 'Torwood' is available and is absolutely spectacular. The flowers are generally pink but can also be white, cream or red and appear in profusion from spring to early summer. Originating in the gold fields of Western Australia this species is thrives in semi-arid and warm temperate zones such as large areas of inland Australia and the southern coastal areas of the continent. It is also reasonably frost tolerant once established. 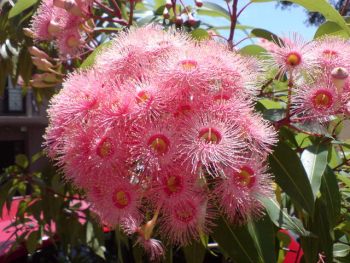 This species is undoubtedly one of the world's most spectacular flowering trees, being grown widely throughout temperate areas around the globe. The terminal displays of large clusters of flowers are visible from a long distance that draws the eye. The dimensions can vary enormously from a small tree of a few metres in both height and width to majestic 20 metre high medium sized specimen. Hybrids of red flowering gum with the swamp bloodwood (C. ptychocarpa) that grow into small trees have become popular in recent years. 'Summer Red' is a bright red while 'Summer Beauty' is pink flowered.

Trees generally flower from mid-summer to early autumn and flower colour can vary within the species through white, cream, various shades of red to orange. The only way to ensure the colour you want is by planting a grafted tree. This species reaches its largest dimensions in Mediterranean type climates (and particularly coastal areas) with low summer rainfall and minimal frosts. It also grows in other temperate climates but does not reach the same magnificence, particularly as summer rainfall increases.

This little known eucalypt has proven to be an excellent smaller growing gum tree for warm humid climates such as Brisbane and Sydney where it flowers profusely and does not get out of hand size wise. Plunkett mallee usually forms a multi-trunked small tree from 2-10 metres in height, spreading from 3 to 7 metres across. The massed display of white flowers is produced in spring and is quite stunning most years. The relatively compact habit of this species brings the display to a height where it is easily appreciated by the viewer as well. The plunkett mallee is best suited to subtropical and warm temperate areas such as Brisbane and Sydney where it is very fast growing, often flowering in only its second year. It tolerates moderate frosts.

The outstanding blue foliage of this small to medium endangered species is its outstanding feature. It is also an outstanding choice for cooler regions of southern Australia, originating from Tasmania. In most garden situations this will become a small tree from 3-6 metres in height by a similar spread; however, it has been known to reach heights of up to 20 metres by 12 across. It responds exceptionally well to pruning which means it can be prevented from outgrowing its welcome if it shows such tendencies. The creamy white flowers are produced from late spring to early summer and whilst they are not spectacular they are nonetheless an attractive complement to the beautiful blue foliage. This is an outstanding choice for cool temperate climates of south eastern Australia where it thrives from Adelaide to the south coast of NSW. It is very frost tolerant and will withstand light snowfalls. 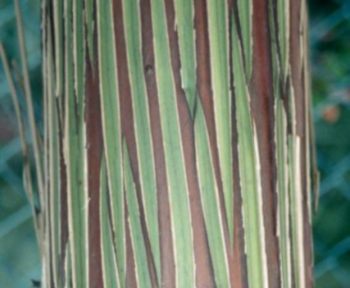 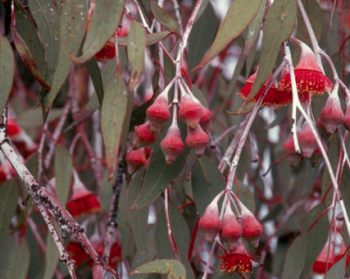 This is another rare and endangered species whose survival is ensured by its outstanding ornamental. Apart from the large showy flowers followed by silvery bell-shaped gum nuts borne on sculptural weeping branches, it also has attractive smooth reddish bark that peels off in strips to reveal brightly coloured new bark that is a feature in its own right.

In garden situations it grows to a height of around 3-6 metres by a similar spread. In very favourable conditions it has been known to grow taller but judicious pruning after flowering will keep it well in hand if such a step becomes necessary. A variety called 'Silver Princess' has an extremely weeping habit with larger flowers and gum nuts. The flowers are up to 5 cm across, making this one of the largest flowered of the gums. Flower colour varies from pink to red with a rare white form also existing. Most seed propagated trees sold in the nursery industry turn out red. Flowering is from winter through to late spring.

It is best suited to the temperate regions of southern Australia from Perth right around to Melbourne. Whilst it will grow in warmer more humid climates such as Sydney it rarely looks it's best particularly in areas that receive lots of summer rainfall.

Originating from the mountains of south eastern NSW and northern Victoria this medium sized eucalypt is a great option for cooler climates with its beautifully gnarled trunk, dense canopy and attractive blue foliage. 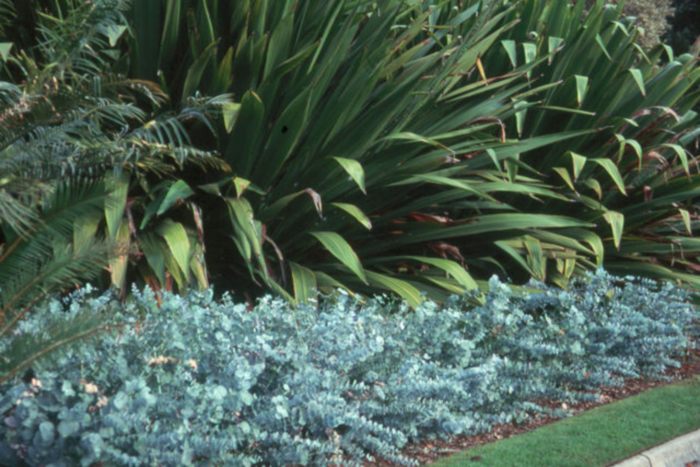 In most garden situations it will reach a height of about 7-10 metres but can grow to a greater height under favourable conditions. It has a spread of 7-15 metres but is usually no greater in diameter than height. The white flowers are not as showy as the foliage but are certainly not unattractive. They are borne from late spring to early summer. Best suited to cool temperate climates and is particularly at home in places like Canberra and Melbourne. It is frost hardy and quick growing.

The classical smooth bark and spreading sculptural gnarled branches make this a wonderful choice for larger gardens where it can be allowed to reach its full potential and placed such that its unfortunate habit of dropping large branches will not pose a danger to property and people. The wonderful lemon fragrance of the foliage is an evocative feature that comes to the fore whenever it rains or is particularly hot. A medium to tall tree that can reach between 15 and 30 metres by a similar spread. This is not a tree for small gardens! The white flowers are produced from winter to early spring but are not particularly noticeable given the large size of the tree. It has proven to be a very adaptable species in cultivation thriving in most coastal areas of Australia from central Queensland right around to Perth. It does not tolerate heavy frosts particularly during the establishment phase.

Botanic Names for Gum Trees
What is the difference between Corymbia and Eucalyptus?

Botanists have traditionally separated gum trees into two different genera, namely eucalyptus and angophora. Several easily recognizable features have been used such as eucalyptus generally having gum nuts with a smooth exterior and an alternate leaf arrangement compared to a ribbed gum nut and opposite leaves in angophora. However, in recent times it has been agreed by most botanists that a group of eucalypts called bloodwoods have greater genetic similarities to angophoras than they do to other eucalypts leading to the creation of a third genus called Corymbia into which all the bloodwoods have now been placed.

Where to see gum trees